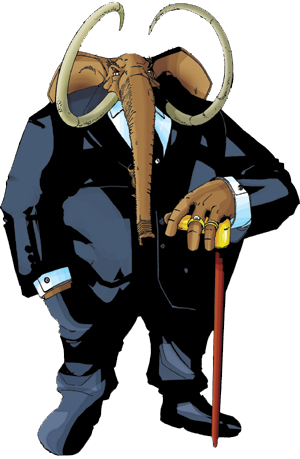 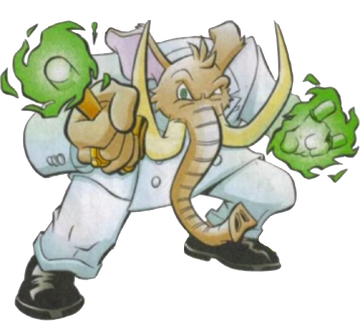 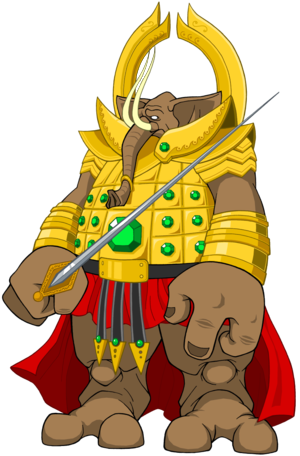 Mammoth Mogul is Tails nemesis and a major antagonist of the Sonic the Hedgehog comic series. He was originally a woolly mammoth present in the early history of Mobius 8,000 years ago and always dreamed of gaining more power. One day, he obtained a Chaos Emerald that fell from the sky and gained immortality along with enormous power. With it Mogul lived for centuries, becoming more wise and powerful as time passed on, and founded the mystical Order of Ixis. After he was defeated during the Forgotten War by the Albion Knights of Aurora, he took on many aliases as millenniums had passed and faded into obscurity until Robotnik came to power.

Superhuman Physical Characteristics, Genius Intelligence, Magic, Reality Manipulation, Weapon Mastery, Time Manipulation, Spatial Manipulation, Matter Manipulation, Teleportation, Absorption, Telepathy, Telekinesis, Transmutation, Intangibility, Forcefield Creation, Energy Projection, Immortality (Type 1), Regeneration (Low-Godly; his life essence was sealed inside the Master Emerald and could restore his body from it after he was freed by the Master Emerald detonating), Self-Sustenance (Types 1 and 2), Memory Manipulation, Telepathy, Duplication, Levitation, Size Manipulation, Illusion Creation, Dimensional BFR, Elemental Manipulation (Fire, Ice, Water, Air and Earth), Mind Manipulation, Corruption (Type 3; exerted his will to corrupt the Sword of Acorns and Crown of Acorns, which are made from pure Source Of All substance), Paralysis Inducement, All the abilities of the Sword of Acorns when wielding it, Resistance to Extreme Cold, Cosmic Radiations, Magic, Resistance to Mind Manipulation, Biological Manipulation, Soul Manipulation, Poison Manipulation, and Life Force Absorption (Egg Grape chambers drain your life force, infuse you with toxins, deletes your “biofield”, and erase your very mind and soul. Even the briefest exposure can cause severe dips in mental capability and drove Naugus to insanity, and the power of a Chaos Emerald prevented Mammoth Mogul from suffering any repercussions within them), and Madness Manipulation (The power of a Chaos Emerald restored Naugus' broken mind)

Attack Potency: Universe level+ (Should be superior to Ixis Naugus), higher with a Chaos Emerald (Stated that a Chaos Emerald amplifies his abilities a thousandfold. Can easily stomp the combined forces of the Freedom Fighters and the Chaotix) | Multiverse level+ (Master Mogul powers make up most of the Master Emerald an artifact capable of destroying infinite realities and creating a new multiverse after that. In addition, it has been described as being able to destroy every zone of existence. Was able to wound the Ancient Walkers after drawing Enerjak power. Superior to Super Sonic, Hyper Knuckles and Turbo Tails) | Multiverse level+ (Drawn all the power of Chaos Knuckles, who was stated by Aurora to have a power that rivaled them. Destroyed all zones with the exception of the Perpendicular Zone and Prime Zone because it was prevented by Titan Tails, it was said several times that there are infinite zones in existence)

Intelligence: Supergenius (His intelligence is equal or greater to Dimitri and Doctor Eggman)

Combat Record: It took Super Sonic, Hyper Knuckles and Turbo Tails to defeat him. Later Titan Tails at full power was able to truly defeat him.