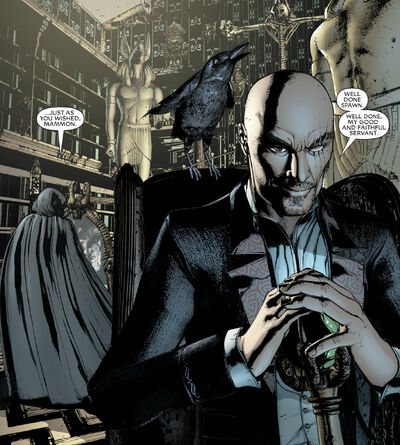 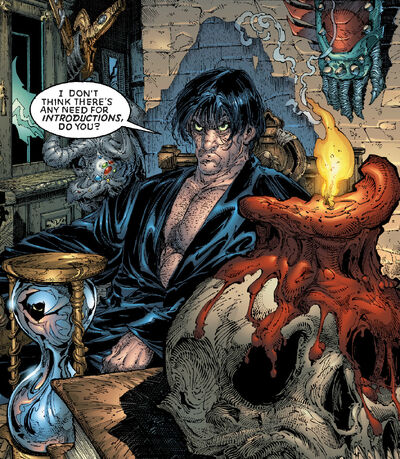 Mammon is a character and powerful entity from the Spawn Comicbook Series. He is one of Hell's many Kings, and a major antagonist of the entire series.

Mammon has been revealed that he was one of The Forgotten Ones, a group of angels that stayed loyal to God but refused to fight against their fellow angels in The Great Battle. For this he and his kind were banished from Heaven, but unlike the rest of The Forgotten, Mammon was not bound to The Tiend and instead appears to have been cast into Hell. He may be a demon, but it is unknown if he truly is or is not. He has transformed into a demonic entity on one occasion, on which he was assaulted by Spawn and scarred with three cuts from the Hellspawn's claws as a reminder that Spawn is a wildcard.

He is a high ranking Lord of Hell. It is unknown which sphere he controls, if he controls one at all but he is obviously one of the most powerful beings in Hell. It has been stated that, while Malebolgia was the King of Hell and ruler of the 8th Sphere, Mal was but a flea in comparison to Mammon. It has also been said that he doesn't have the power to grant certain things, that the only one who can is Satan. This places him between Mal and Satan in the power structure of Hell. This is supported by Thamuz, who refers to Mammon as Lord, but to Satan as Master.

Age: Inapplicable. Exists outside of Time

Powers and Abilities: Superhuman Physical Characteristics, Flight, Regeneration (Low-Godly), Life-Force Absorption, Intangibility/Phasing, Fire Manipulation (can manipulate conjure and even set souls on fire), Light Manipulation, Animal Manipulation, Power Nullification (can depower and repower demons), Soul Manipulation, Shapeshifting, Size Alteration, Time Manipulation, Hallucinations, Technopathy, Telepathy (multiverse range), Telekinesis, Psychometry, Materialization, Life and Death Manipulation, Transmutation, Precognition, Clairvoyance, BFR, Teleportation, Evil Manipulation (can use and manipulate the corrupted hearts and sins of others to either materialize creatures corresponding to the level and nature of their evil to kill them, bestow it on someone else, or use it to fuel his own energy), Summoning, Reality Warping, Energy Manipulation, Spatial Manipulation, Mind Manipulation, Magic, Immortality, and others.

Attack Potency: Universe level+ (Holds absolute control over the 9th Circle of Hell, which is infinite in size) | Low Multiverse level (While sitting on God's throne, Mammon can snuff out multiple universes of possibilities.)

Speed: Unknown, likely Massively FTL+ or Immeasurable (Hell Kings are superior to anyone outside of gods), Omnipresent within his realm (The 9th Sphere of Hell is an extension of himself) and in the main universe

Intelligence: Immensely High / Vastly Superhuman. Has been manipulating Al Simmons' life going back centuries before he was even born, guiding his family tree to the birth of the perfect Hellspawn. Had both Malebolgia and all of Hell under his hand, and manipulated their actions according to his plans. Planned Spawn's murder of Malebolgia and predicted God's disappearance. Planned ahead of The Apocalypse and manipulated the actions of both God and Satan. Banished the Mother of Existence away from the physical universe for over 1000 Years.

Key: Base | While sitting on God's throne