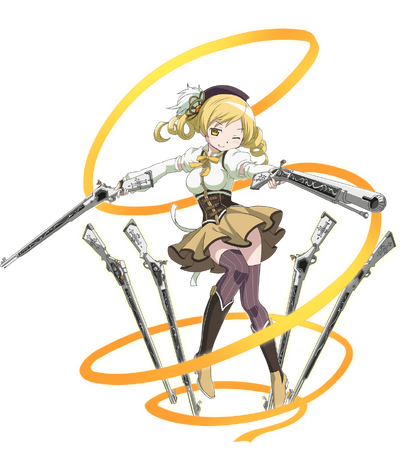 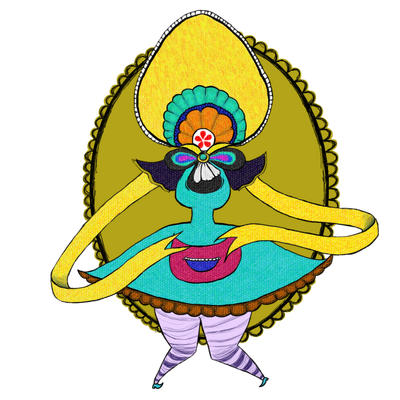 The reliable tutor of Madoka Kaname and Sayaka Miki in the original series, she would teach them what it means to be a magical girl. In the spin-offs, Different Story and Kazumi Magica, it is revealed she had taught and inspired other girls before the duo, such as Kyoko Sakura and Kazumi Subaru' original.

Currently, she played a prominent role in Magia Record, where she was initially the protagonist of the Another Story and then a major antagonist in the main story as Holy Mami.

All previous abilities, Immortality (Type 8, depends on the existence of her familiars.), Reality Warping, Pocket Reality Manipulation, Absorption, Invisibility, Curse Manipulation, Familiar Summoning, Mind Manipulation (With Witch's Kiss), Self-Resurrection (Able to resurrect from her Grief Seed, although this isn't applicable for combat unless the Grief Seed is filled with despair.), Immunity to Soul Manipulation (Lacks a soul)

All previous abilities, Status Effect Removal (With A Salvation Prayer to You), Teleportation, Illusion Creation, Memory Manipulation, Fusionism/Possession, Emotion Detection, and Resistance to Energy Projection as Holy Mami. As Holy Mami, she is possessed by a Rumor, so by all technicality, her true form is the Rumor. (Thus she technically has Abstract Existence (Type 2, possibly 1), Immortality (Type 4 and 8, as Holy Mami it also depends on her rumor not being broken), Resurrection/Reactive Power Level (Whenever she comes back, her durability will be extensively higher) and other abilities), Homing Attack and minor Light Manipulation/Holy Manipulation (With Tiro Finale Holy Night). Fake Body, Intangibility and Body Control as Doppel of Worship.

Lifting Strength: At least Superhuman (Casually carries her giant cannon for Tiro Finale quite often with no real fatigue), likely far higher as a witch and / or doppel witch.

Stamina: At least Superhuman (Her 2.5 rating places her significantly above Sayaka Miki in stamina. As a normal magical girl she will transform into a witch if her stamina were to deplete, however.) Higher as Holy Mami (States that she has no issue with summoning her doppel, something even most regular magical girls would doubt doing due to massive physical strain it causes.) Likely limitless as a witch and as a Doppel witch. Her stamina is restored upon using the Doppel transformation.

Range: Her soul gem can only possess her body up to 100 meters. Several Kilometers with her various assortment of rifles and abilities. | At least Several Kilometers with witch abilities (Far superior to H.N. Elly). Teleportation is likely higher to an unknown degree. | At least several dozens of kilometers as Holy Mami (Created a blizzard by simply appearing, could teleport anywhere within the Kamihama City.) possibly hundreds of kilometers (Managed to get to Mitakihara City from Kamihama City and vice versa likely through Teleportation.)

Finale Cannon 2
Add a photo to this gallery

Intelligence: Genius in combat (Has shown unparalleled skills and capabilities in the Puella Magi verse, only ever matched by some of the most haxxed characters in the verse and is considered one of the best magical girls not just by her peers but by Kazumi Subaru and Yachiyo Nanami, both respectable magical girls in their own right, and has proven to be able to adapt to her opponent's powers, with examples listed in the the Feats section below.), at least Gifted in Biology and Gun Mechanics (Has an in-depth knowledge of her own biology and several firearms, as shown when she made herself [The Gun Train] as it is needed to create or duplicate through her ribbons.) Likely High otherwise (Holy Mami has stated that even if she took a year off her school studies to work as a White Feather, she wouldn't suffer much grades wise.). Lower as Candeloro, but she is able to position her familiars in a strategic location. Note that Doppel Witches generally have a mind of their own in addition to their 'Masters', however, it is more violent and bordering on the morally gray.

Weaknesses: She freezes up if things don't go as expected, she can get reckless when in-front of people, and is mentally fragile. Destroying her Soul Gem would kill her immediately. | None of her previous weaknesses apply as a witch. | Same | None of her previous weaknesses apply now either. Removing her Holy clothing would defuse Holy Mami back to Mami Tomoe and a rumor.