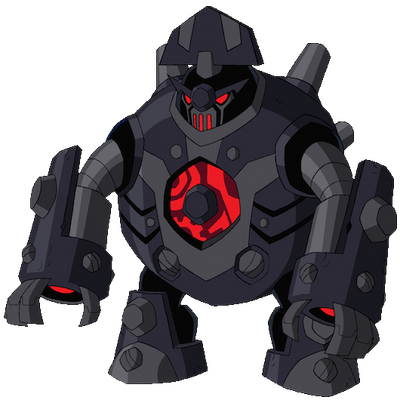 Maltruant is a rogue Chronosapien and the main antagonist for the final two arcs of Ben 10: Omniverse. He is also the mastermind behind the Time War.

Maltruant is extremely power-hungry and desires nothing but to rule time itself. He likes to tamper with the fabric of time and brags about it.

Powers and Abilities: Superhuman Physical Characteristics, Time Manipulation (Can Time Travel, speed up time, slow down time, reverse time, age targets into dust, send others through time or into other timelines, restore individuals who've been erased from time, stop time, and open portals in time), Dimensional Travel, Can create holographic projections of the past, Knows the exact time certain event has taken place, Self-Sustenance (Type 1), Resistance to Extreme Cold and Cosmic Radiation

Attack Potency: Wall level (Should be comparable to Clockwork and is noted to be somewhat more powerful), can ignore durability with his abilities

Speed: Unknown (Chronosapiens are noted to be fairly slow by alien standards and can easily become winded if forced to run for an extended period of time, forcing them to rely on their time manipulation abilities in order to keep pace with others and make them seem as if they are moving extremely quickly to outside viewers)

Durability: Wall level (Maltruant was able to take multiple attacks from Excalibur, which can easily cut through a thick metal alloy door, and Rook's Proto-Tool without injury. Should be comparable to Clockwork who survived an energy blast that could kill a human)

Intelligence: Extremely High. He is the mastermind behind the Time War that was troublesome even to Professor Paradox

Weaknesses: His time powers won't work in places without time. His powers can be detected by other beings that are able to manipulate time, and can thus be subsequently countered. Can tire easily.