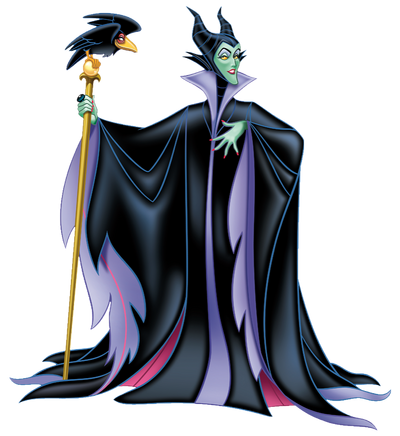 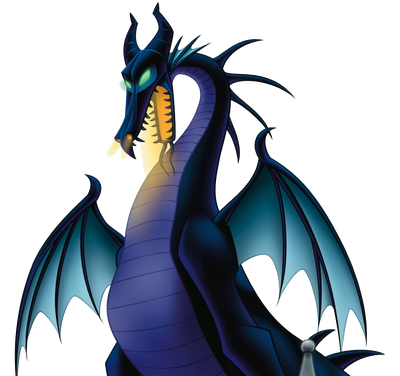 Maleficent is an evil fairy and the main antagonist of Disney's 1959 animated feature film, Sleeping Beauty and the protagonist of the 2014 live-action film, Maleficent.

Maleficent is responsible for all misfortune in King Stefan's kingdom. She takes offense at not being invited to the christening of Princess Aurora and attempts revenge on King Stefan and the Queen by cursing Aurora. She appears to be particularly disdainful of the three good fairies Flora, Fauna and Merryweather, her polar opposites, who do all in their power to keep Maleficent's overwhelming evil magic at bay.

Powers and Abilities: Magic, Lightning Manipulation, Fire Manipulation, Precognition via Divination, Can inflict curses, Plant Manipulation, Limited Animal Manipulation (Appears to have a symbiotic control over her crow Diablo), Ice Manipulation (Can create and control frost storms), Creation (Conjured the spinning wheel and spindle which she used to prick Aurora's finger), Petrification, Teleportation, Transmutation, Flight (Can fly in a form of energy similar to a comet) and Regeneration (Low-Godly, can come back from the dead as long as someone remembers her), Can also Shapeshift into a dragon, granting her Superhuman Physical Characteristics, Fire Breathing and Poison Manipulation (Her fangs in this form were shown to be venomous in Maleficent Returns)

Attack Potency: At least Town level (Created and destroyed a whole forest of thorns), likely higher (Repeatedly and officially stated to be one of the most powerful villains in Disney history). Higher in her dragon form

Durability: Unknown in human form (She was never attacked). Building level by virtue of her sheer size in dragon form.

Weaknesses: Overconfident in her abilities and easily angered if her raven familiar Diablo is harmed. Is stubborn and a perfectionist, requiring that everything go as planned. Rather vulnerable to good/holy magic.