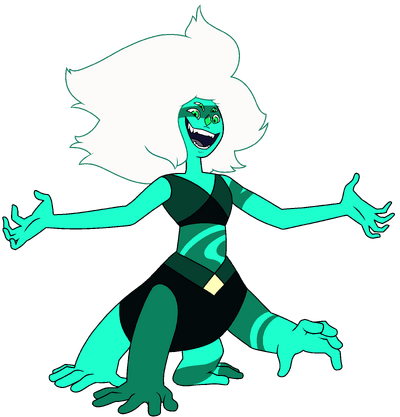 Malachite is the fusion of Jasper and Lapis Lazuli, who first appeared in the episode "Jail Break". After being fused for several months, she was finally defeated by Alexandrite during their battle in "Super Watermelon Island". Due to being a fusion, Malachite's personality is a twisted combination of both Jasper and Lapis' character traits. However, due to her being a very unstable fusion held together with anger, their personalities are present rather than merging into a new one. Once formed, she was shown as having Jasper's disdain for the Crystal Gems and wishing to see them destroyed, but Lapis' consciousness was later shown to be the most dominant, as she was able to overpower Jasper's.

Attack Potency: At least Multi-Continent level (Vastly superior to Jasper and Lapis, the former being a very powerful gem that was nearly as powerful as Garnet and the latter of whom could control Earth's ocean and form it into a giant tower even while she was weakened with a cracked gem; While communicating with Steven through his dreams, Lapis stated that Malachite would be a threat to all life on the planet if she escaped)

Lifting Strength: Class Z (Capable of withstanding and pushing back against the force of the entire ocean)

Durability: At least Multi-Continent level (Lapis stated that it takes the weight of the entire ocean to keep Malachite imprisoned, and this weight was held on her for at the very least weeks on end)

Intelligence: Presumably high (Composite of both Lapis and Jasper), though clouded by her conflicting personalities

Weaknesses: Sufficient damage to her physical form can revert her back to her vulnerable gem form which can be broken and destroyed, The conflicting personalities of Jasper and Lapis Lazuli deep inside her