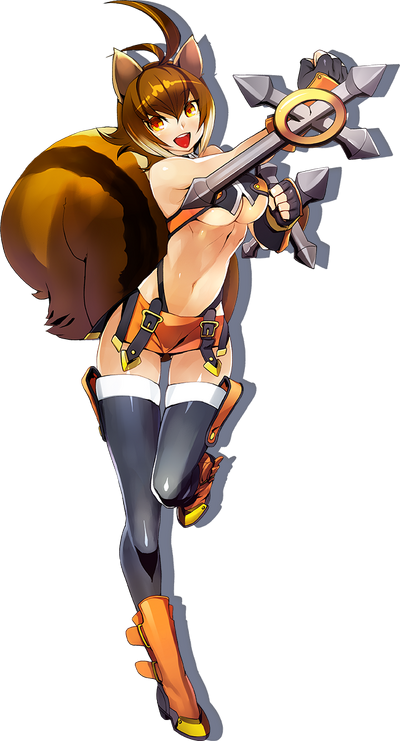 Makoto Nanaya is a squirrel-type Demi-Human and is considerably hyperactive with a short attention span, though she has proven to be rather cunning when she needs to be. She is outgoing and adventurous. She has a few complexes about her race, but nonetheless, she acknowledges who she is and is proud of it. In BlazBlue: Continuum Shift, Makoto works for the Novus Orbis Librarium Intelligence Department with Hazama but is actually a spy for Sector Seven. In the True Ending, she defects from the NOL after finding out what happened and leaves with Noel and Iron Tager.

In Makoto's arcade ending in Continuum Shift II, it is revealed that one of the reasons Makoto is in the 13th Hierarchical City of Kagutsuchi is because of her discovery of the several failed attempts by the NOL to create Noel at Ikaruga.

Superhuman Physical Characteristics, Self-Sustenance (Type 1 [Can survive the Edge, which lacks any oxygen), Ars Magus User, Martial Arts, Forcefield Creation (Anyone who were taught at the NOL are able to create barriers), Limited Glyph Creation (Can create glyphs when unleashing her power), Enhanced Senses (Has very good senses due to being beastkin), Longevity (Beastkins have long lifespan), Non-Physical Interaction (Can hit Arakune and Izanami), Energy Manipulation, Astral Projection (Can create giant fists out of thin air to hit her opponents), Fire Manipulation, Reactive Power Level (Is stated to have the Power of Order, which allows her to be as strong as any threat on the world), Illusion Creation (Can make illusive clones of herself to trick her opponents), Statistics Amplification, Air Manipulation, Regeneration Negation (Up to High-Godly; is able to utilize Ars Magus, a weapon capable of killing the Black Beast, a creature that has the ability of Self Observation, which is what Terumi used to regenerate from Hakumen's Time Killer), and Limited Subjective Reality (Power of Order can make something that doesn't exist exist)

Resistant to the Following: Transmutation (As a chosen, she's unaffected by the Embryo's effect to turn everything into seithr), Poison Manipulation, Madness Manipulation, Biological Manipulation, and Statistics Reduction (Everybody can resist Seithr to some extent which is poisonous, can induce addiction and deteriorate bodies, as well as reducing the power of others), Heat Manipulation (Is unfazed by the intense heat from a cauldron), Corrosion Inducement (Resists getting corroded by the Cauldron), Time Manipulation (Can resist the effects of Cauldron and/or Boundary, which stops time by existing), Memory Manipulation (Can resist the effects of Cauldron and/or Boundary, which erases memories), Mind Manipulation (Able to resist the boundary/cauldron, which when entered or get closed, will result in taking infinite information, dating across beginning of time and all possibilities), Petrification and Gravity Manipulation (As a person with competent skills in Ars Magus, she could create an Ars Magus Barrier, which is stated to protect the user from these effects), Perception Manipulation (Resist the effects of Ars Magus, which nullifies senses of the user), Absolute Zero and Life Manipulation (Could withstand Yukianesa's strikes, which can freeze Azrael and erode away life), Soul Manipulation, Healing and Regeneration Negation (up to High-Godly), and Fear Manipulation (Is capable of fighting against Ragna with the Azure, which can inflict soul damage beyond the help of a multiversal entity, and negate any form of Recovery, is also unfazed by his passive fear hax, can withstand the blows of the Azure, which is far superior to the Nox Nyctores, which are also superior to Ars Magus, weapons that are capable of killing the Black Beast, a creature that has the ability of Self-Observation, which is what Terumi used to regenerate from Hakumen's Time Killer),  Void Manipulation, and Corruption (Type 3) (Can resist the effects of the boundary, which can erase those that enters it, and corrupt them beyond recovery in a similar fashion to what happened to Arakune), Power Nullification (Is able to use her powers despite Kushinada's Lynchpin being activated), Death Manipulation (Could resist the effect of the Immortal Breaker), Phenomena Intervention (Unaffected by phenomena intervention even by Amaterasu with Celica's blessings) and Attack Negation (Able to permanently damage Es)

Attack Potency: At least Building level (Shouldn't be far too below RH Mai) | Large Town level+ (Can hold her own against Tager) | At least Large Town level+, Possibly Large Planet level (Can somewhat keep up with CF Ragna, and was able to subdue Naoto), higher with the Power of Order

Speed: Massively Hypersonic+ | FTL (Can react to Tsubaki's attacks) | At least FTL (Can keep up with Izayoi)

Stamina: Incredibly high, can fight for long periods of time thanks to her Beastkin genes.

Intelligence: As a member of the Intelligence Department of the NOL, Makoto has proven to be very cunning and capable of gathering any sort of information, though her flighty, scatter-brained nature can interfere with her thinking clearly. Despite this, she has managed to thwart Terumi twice.

Note: A 5-A calculation for Makoto's Planet Crusher is considered to be an outlier. 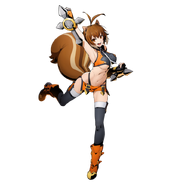 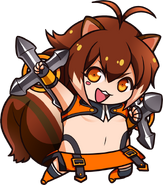 Makoto's chibi portrait
Add a photo to this gallery