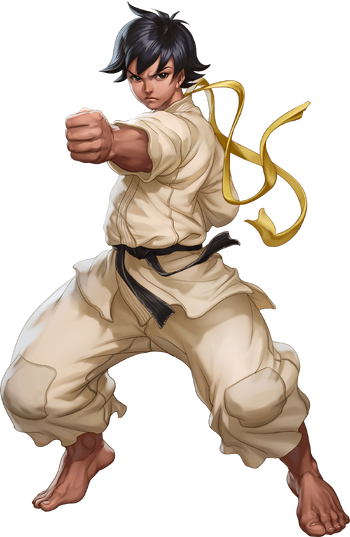 Makoto (まこと) is a Street Fighter character from Street Fighter III 3rd Strike and Super Street Fighter IV. She is a tomboyish Japanese teenager looking to bring back the glory to her late father's dōjō. Although she's still young and a bit short, her karate form is very impressive.

Makoto's fighting style is Rindō-Kan karate, a very aggressive karate form. With calmly performed special moves, rapid movements and punches or kicks that have her full body weight behind them, she has a lot more power than expected from her small body. She displays the "total victory with one hit" essence of karate.

Makoto loves the heat of battles, she fears no one, and will challenge any opponent. While she is still young, many fighters are impressed by her skill and power, and urge her to continue her training.

Attack Potency: Small Town level+ (Fought on par with Fei Long to raise the popularity of her dōjō)

Speed: At least Supersonic+ (Able to fight Fei Long and a casual Base Ryu)

Stamina: High (Has fought many opponents challenging her dōjō one after the other)

Intelligence: Above Average (Makoto is a highly skilled combatant. Her Karate is very impressive and she has been complimented for it by many experienced fighters)

Weaknesses: She is somewhat inexperienced due to her young age, but she more than makes up for it with her unusually high talent.

Retrieved from "https://vsbattles.fandom.com/wiki/Makoto_(Street_Fighter)?oldid=4118675"
Community content is available under CC-BY-SA unless otherwise noted.