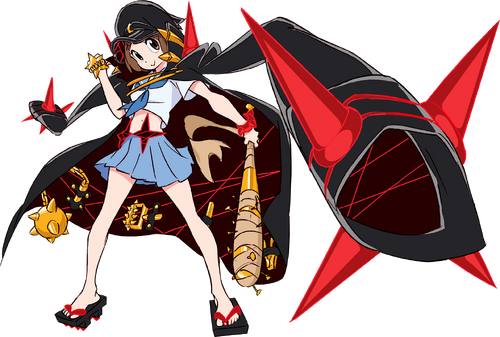 Mako Mankanshoku is one of the main characters of Kill la Kill. She is the cheerful best friend of Ryuko Matoi, with her extremely silly and lighthearted personality serving as a foil to Ryuko's often tough and hotheaded demeanor.

Attack Potency: Wall level (Snapped through raw Life Fiber strings which have superhuman durability and are much stronger than steel. Seriously injured her father, who was able to survive falling hard enough to crush cars and getting punched into a ceiling, with a casual tackle) | Small Town level (Made a large crater in her fight against Ryuko) | At least Mountain level (Oneshot several COVERs, Knocked around a Combat COVER, Able to oneshot Nui Harime's clones, which are able to overpower the Mk 2 Elite 4)

Lifting Strength: Superhuman (Pulled the Scissor Blade out of a slab of concrete with enough force to slightly split the wall it was in) | At least Class 1 (Should be much stronger than Takaharu Fukuroda) | Class M (Was able to lift and wield 999 Emergency Suction Devices simultaneously)

Durability: At least Wall level (Survived being hit several hundred times from the 1-Star Tennis Club members, each of which can shatter wooden training targets and dent steel with their tennis balls, with little injury. Easily caught projectiles powerful enough to instantly incapacitate 1-Star fighters without any sign of pain. Tanked getting launched high into the air by an explosion on multiple occasions.) | Small Town level | At least Mountain level

Stamina: High (Was able to fight Ryuko for an entire day without getting tired)

Intelligence: Varies (Mako's intelligence is often highly inconsistent and situational. During her time as president of the Fight Club she showed a high level of competence and professionalism, as well as the ability to do complex paperwork, very advanced equations and absurdly extensive work all in short periods of time. However, she has also been lured into obvious traps on multiple occasions. Along with being notorious for underachieving in academics, she's also somewhat delusional and doesn't always perceive reality as it actually is, though she is fully aware of this fact and can recognize when something in her head isn't the same as in real life. She has, however, been recognized by both Iori and Inumuta as having the highest combat skill, both in and out of a Goku Uniform, out of all of the regular students at Honnouji Academy)

Weaknesses: If someone cuts the Banshi thread of the Fight Club Uniform she becomes more vulnerable