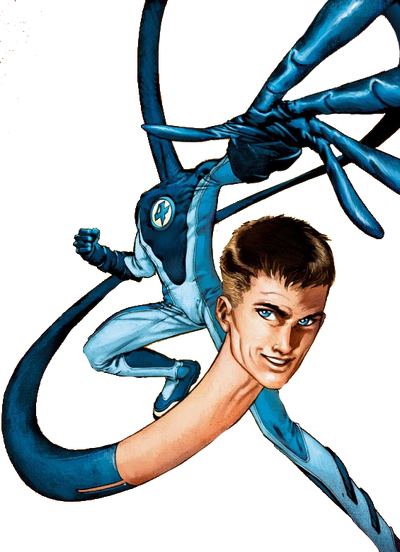 While traveling across dimensions, Reed Richards and his team were altered, granting them different powers, with Reed himself getting the powers to stretch himself to unimaginable lengths. Calling himself Mr. Fantastic, he and his teammates Ben Grimm, Sue Storm and Johnny Storm formed the team Fantastic Four to serve for peace and justice across the galaxy.

However, being exposed to death and destruction on a large scale affected Reed on an emotional and psychological level, and as his new persona of the Maker, he used to his intelligence to do what he believes would fix the world, no matter at what costs. This emotionally cold approach to rescuing lives puts him at odds against other heroes across the multiverse.

Tier: 7-A, far higher with Technology and Preparation

Powers and Abilities: Superhuman Physical Characteristics, Preparation, Elasticity, Size Manipulation, Self-Sustenance (Types 1, 2 and possibly 3), Enhanced Senses, Hacking (Hacks into highly advanced Kree tech), Social Influencing (Convinces the Hulk to aid him in his mission), Regeneration (At least Mid), Immortality (Types 1, 2 and 3), Statistics Amplification (Can grow more intelligent by expanding his brain), Self-Duplication and Resistance to Mind Manipulation (All N-Zone mutates have their brain frequencies different than normal people), Matter Manipulation (His molecular structure is indestructible), Antimatter Manipulation (Survived unprotected exposure to the Negative Zone, which is an entirely antimatter universe) and Illusion Creation (Looks past a hallucination caused by military forces by noting his other senses). With Preparation and equipment, he can get Forcefield Creation, Technology Manipulation (Creates a device which blew up Doctor Doom's machinery), Electricity Manipulation (As shown here), Flight (Using the Fantasti-Car), Time Travel (As shown here), Dimensional Travel (Jumps to the Zombieverse) Biological Manipulation (Created baby clones of the Ultimates), Explosion Manipulation, Invisibility, Large Size (Type 1) and Fire Manipulation in the Fantastic-Oh-Five, Creation and Summoning (As shown here), De-Evolution Ray and Power Nullification (As shown here)

Attack Potency: Mountain level (Can harm those who harm him. Can trade blows with Doctor Doom and the Thing, though is physically weaker than the latter), far higher with equipment and preparation (Destroyed 80% of Gah Lak Tus using the Nevada/Big Bang Gun)

Lifting Strength: At least Class 1 (Can restrain the Thing, who weighs 748 kgs)

Durability: Mountain level (Took hits from The Thing and Thor), higher with forcefields (Stated by Invisible Woman to be superior than her own)

Stamina: High (Can fight for extended periods despite being damaged)

Intelligence: Supergenius (Has shown mastery over computer technology, engineering, linguistics, medicine, physics and mathematics, alongside many more fields. Has invented physics-defying technologies like time and dimensional travel, The Dome, The City and the Cosmic Cube in only a few weeks. Temporarily merged all of the universes in the Marvel multiverse into a single unit.)