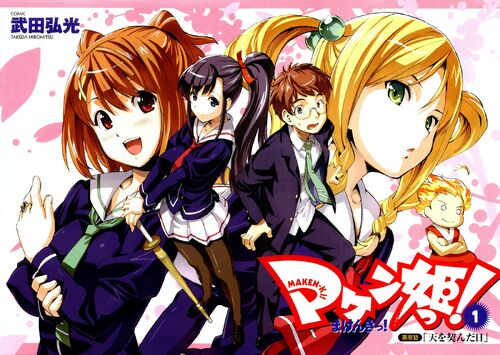 Maken-Ki (マケン姫っ! Maken-Ki) is a manga series by Hiromitsu Takeda. It was published by Fujimi Shobo's magazine Dragon Age Pure, and later Monthly Dragon Age. The story follows Ooyama Takeru who just enrolled into Tenbi High School in hopes of achieving his perverted dreams, however soon he joins Maken-Ki a group which serves as a security on Tenbi grounds from where on he has to battle numerous villains with his friends to survive.

Maken-Ki! is a verse whose characters draw power from Element, the energy of the verse which can be used for a lot of applications but usually it is used to enhance the strength of an object or a person and Maken, vessels created when gods are born, as such they were originally only used by the gods whose birth led to their creation. However most of the characters use "fake" Maken which are created by Gen Tagayashi

Maken-Ki is also very gifted with Hax ranging from: Minerva's ability to instantly BFR someone, Koushi's power copying abilities, Yamato's possession which he can use even after he has died, Kimi's ability to warp reality, Sui's ability to steal someones right of action ranging from simple things like moving to take away the right to breathe or even live, Ooyama's Kamudo which allows him to compress space-time by 10 times effectively slowing the opponent 10 times and many other Hax

Retrieved from "https://vsbattles.fandom.com/wiki/Maken-Ki?oldid=6501869"
Community content is available under CC-BY-SA unless otherwise noted.