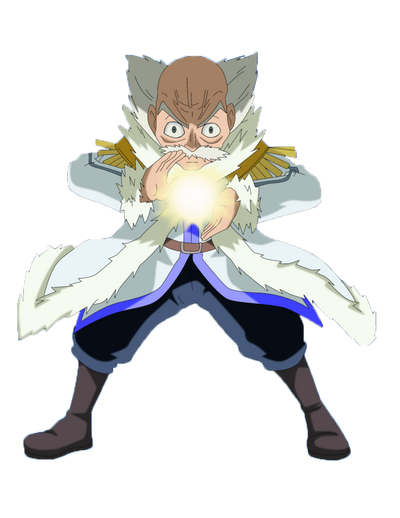 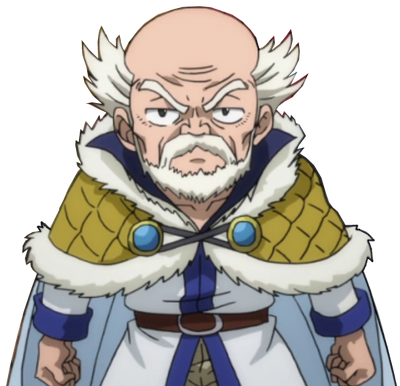 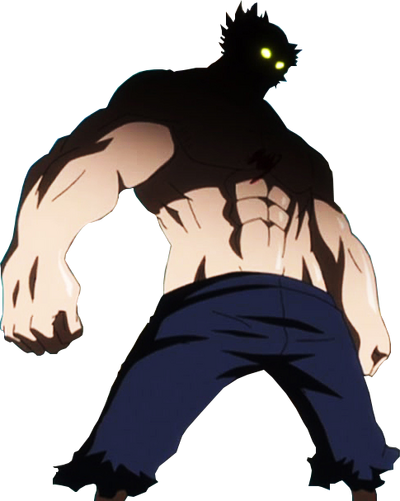 Makarov Dreyar (マカロフ・ドレアー, Makarofu Doreā) was both the 3rd and 6th and currently the 8th Guild Master of the Fairy Tail Guild, as well as one of the Ten Wizard Saints.

Stamina: Very high (Despite his old age, he can still fight for extended periods of time)

Intelligence: Gifted (Despite acting like an idiot most of the time, Makarov with his advanced age is very smart with a wealth of experience in battle. He also possesses a wide variety of magic, implying many years of study and practice.)

Weaknesses: His health issues tend to limit his combat efficiency making him more vulnerable to his opponents attacks.

Titan (巨人, Jiyaianto): Makarov’s signature Magic that makes up for his small size, Titan, as the name suggests, allows him to enlarge his body to gigantic proportions. Such enlarging power is immense, even allowing Makarov to grow himself to near the size of Tenrou Island. Additionally, it can also be employed on selective parts of Makarov's body, elongating them and making it look like he possesses elastic properties of sort, coming in as a very versatile Magic. Titan’s effects can also be transferred to other people aside from Makarov himself, as shown when he could use it to grow Reedus Jonah's chest to the latter’s request, in order for his Pict Magic to work better. When he employs his complete Titan form, Makarov’s muscles bulge in size, with prominent veins becoming visible (though, when he first employed it, he instead gained a slender figure, and his mustache becomes wilder, pointing upwards. He’s also shown to emit light from his eyes, possibly a result of his Light Magic.

Titan Magic
Add a photo to this gallery

Maximum Defense Seal (最大防御魔法陣, Saidai Bōgyo Mahōjin): Makarov releases several Magical seals, which float around him and seemingly inhibit another seal-based attack performed against him, acting as a defense. Makarov has also been known to perform hand gestures and create seals in the air while on the verge of being struck on other instances, using them to shield himself from incoming Magical attacks.

Three Pillar Gods
Add a photo to this gallery

Light Magic (光の魔法, Hikari no Mahō): A type of Elemental Magic which relies around the use of light. Makarov is known for being capable of manifesting his immense Magic Power in the form of light, as well as to use it to attack opponents. During his fight with Jose Porla, he was shown drawing ethereal spheres of light in the air, joined together by beams reminiscent of constellations, to perform unseen spells.

Light Blast
Add a photo to this gallery

Fairy Law (妖精の法律, フェアリーロウ, Fearī Rō): One of the three legendary spells exclusive to Fairy Tail, Fairy Law is described as Makarov's most powerful Magic: when activated, a bright light envelops a wide aura around him and inflicts heavy damage on whoever he perceives from his heart as an enemy, leaving friends and bystanders completely unharmed. Makarov's mastery over such spell is so great that he defeated Jose Porla, Phantom Lord's Guild Master and a fellow Wizard Saint, in a single blow.

Fairy Law
Add a photo to this gallery

Fire Magic (火の魔法, Hi no Mahō): Makarov is able to use this type of Magic, generating fire around his hand to burn some documents he received from the Magic Council, subsequently throwing the burning sheets at Natsu, who ate them.

Wind Magic (風魔法, Kaze Mahō): Makarov has been said to possess Wind Magic, a form of Magic which, as the name implies, allows the user to generate, manipulate and control wind. It's as of yet unknown, however, which spells he's capable of using.

Ice Magic: Makarov is known for being capable of employing different types of Magic, among which is Ice Magic. Due to him not having used it openly, however, it's as of yet unknown whether this is a form of Ice-Make or not.

Requip (換装, Kansō): Makarov has been shown capable of using this Magic, summoning his Ten Wizard Saints robe and boots after being attacked by Hades.

Dispelling Magic: Makarov has been shown capable of dispelling certain and advanced spells with relative ease such as shown dispelling Macao's Transformation and Alive in a Dark Mages' village.

Flight: Makarov has shown capable of flight or rather levitating in the air such as shown during his battle with Jose Porla who also possess the same ability.

Master Sensor: Makarov possesses great skill in sensing and discerning the nature of Magic power. He could read through Macao's attempt to impersonate Natsu without effort, while all of the other members were fooled by his transformation. He was also able to find out about Grimoire Heart's presence near Tenrou Island before the Dark Guild managed to land, sensing the Magic Power of its members from far away.