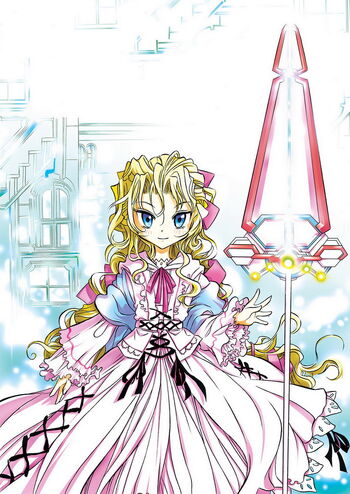 Majsha is an leader Anti-GM's (used to be a member number 10 of 1 in 12 KEYS master) when she first appeared as a goldfish. In most cases, she will be responsible for the various plans within the anti group. When the GM war began she led the Kanda into the main vehicle of GM in order to destroy The main vehicle of the GM from the side, but the GM knew about this plan, so have prepared the main members to fight with Majsha. She use skill teleported and led Kanda away. By she will delay the GM, in order not GM to support the war but in the end, she was attacked by the GM crowd until her death was near the end of the war.

After the GM war ended, she gathered the members and stopped the Holyorder from gathering KEYS, but failed. After that she canceled the Anti-GM and created a new group with Kanda is the leader, where she will serve as the group's senator.

Tier: 7-A, 5-B with Red Shift | 4-C with Justice-Ray, higher against Heaven Prisoners

Powers and Abilities: Superhuman Physical Characteristics, Flight (with skill fly), Immortality (Type 4; Player, after dying for a while, will be resurrected to another location within the star that died itself randomly), Information Analysis (Player can check the detailed information of weapon and item), Dimensional Storage, Resurrection, Statistics Amplification, Statistics Reduction, Genius Intelligence (with ESP, which uses electrical stimulation to send directly to the brain, which is divided into ESP types into Genius, Instincn, and Enlightenment, which Majsha is type as Genius), Gravity Manipulation, Electricity Manipulation,Healing, Purification, BFR, Teleportation, Paralysis Inducement, Shapeshifting (Able to become a goldfish when not yet into battle)

Range: Tens of meters with spell, tens of kilometers with Justice-Ray, planetary with Red Shift

Intelligence: With Majsha is ESP primaric genius, she's very intelligent. With her ESP, when to time war. Majsha will be able to constantly think of new strategies.

Retrieved from "https://vsbattles.fandom.com/wiki/Majsha?oldid=5656942"
Community content is available under CC-BY-SA unless otherwise noted.