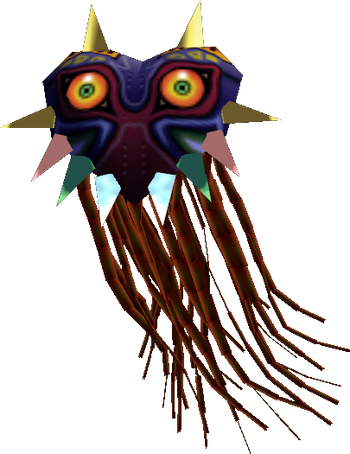 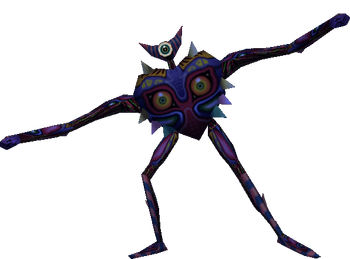 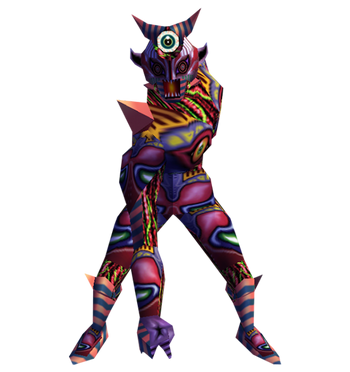 Majora is the assumed name of the main antagonist of The Legend of Zelda: Majora's Mask. An evil being inhabiting Majora's Mask, it is arguably the series' most depraved and bizarre villain. Despite appearing as an inanimate object, and using the Skull Kid as its puppet, the mask carries obvious sentience and the ability to speak coherently, through its wearer or of its own power. The gender of Majora is disputed, as neither the game nor any supplementary material states it. It is likely that the true entity simply has none.

The true form of Majora is arguably never seen. During Link's final battle with the spirit, it transforms into three different forms. It is possible that the appearance of Majora's Mask may somehow resemble the true appearance of Majora, if it ever even had one; however, this cannot be confirmed, but it is widely considered to be a possibility.

Attack Potency: Universe level (Said to have warped all of Termina, a parallel universe, to the point where the heavens, space, and time were corrupted[1]. In his final form, he created and sustained a universe, which then collapsed upon his defeat)

Stamina: Extremely high (Kept the moon in a fixed position above Termina while at the same time constantly pulling it down over the course of three days), possibly limitless as Majora's Wrath (As an entity that was not strictly physical, it never appeared to grow tired after becoming serious about the fight)

Intelligence: Highly sadistic, although it apparently only views all its havoc as a game. Capable of setting up complicated dungeons and puzzles for Link to solve.

Weaknesses: Has a tendency to play around, which makes it careless. Several times throughout the game, Majora could have effortlessly killed Link but was more interested in playing a twisted game with the hero. Majora was so assured of its own superiority, it even gave Link the Fierce Deity Mask to use against it during their final confrontation.