VS Battles Wiki
Register
Don't have an account?
Sign In
in: Characters, Dragon Ball, Absorption Users,
and 56 more 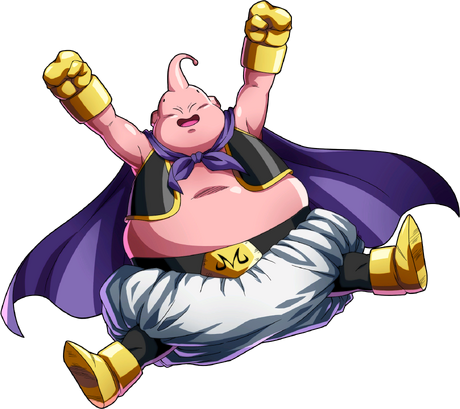 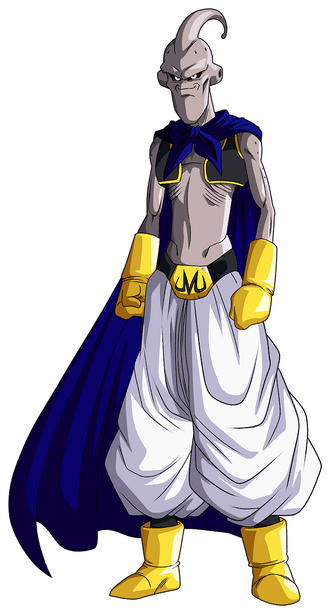 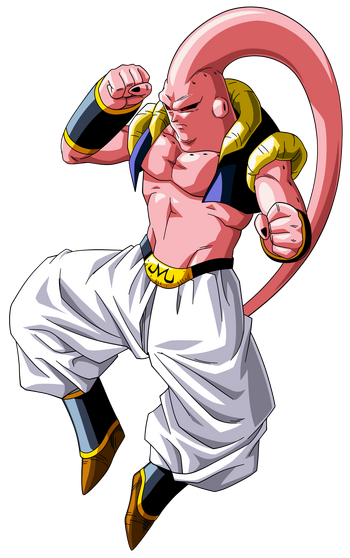 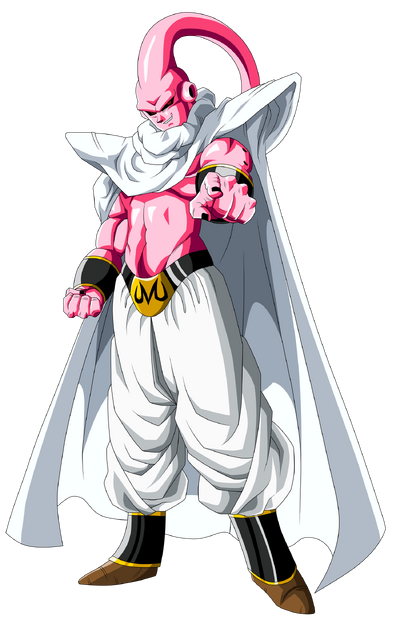 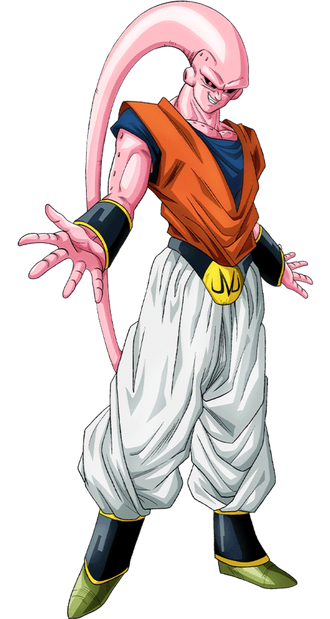 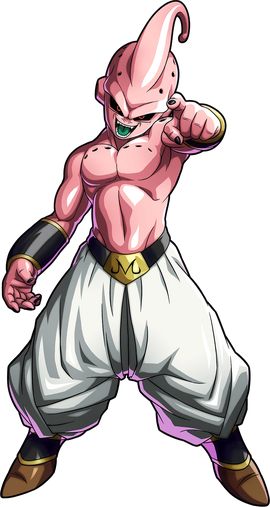 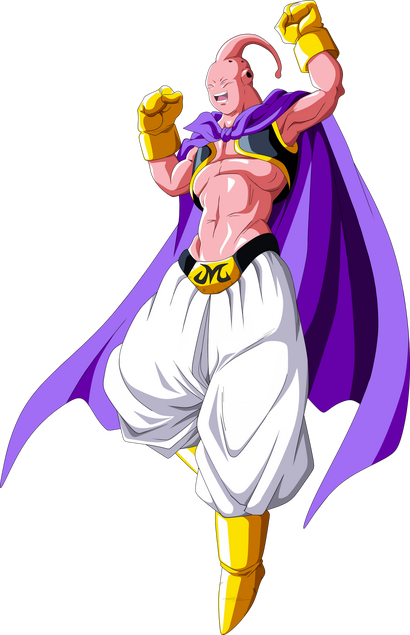 Majin Buu is an ancient force of destruction that has existed since time immemorial, cycling between periods of rampaging and hibernation. During his rampages, he absorbed the evil elements of races he eradicated and steadily became more violent and evil. The evil mage Bibidi knew how to summon and control him and eventually used him to slaughter most of the Supreme Kais. However, after absorbing the Grand Supreme Kai, he was transformed into a less evil force by the Kai's influence and was later sealed by Bibidi before his death. 5 million years later, Babidi comes to Earth to summon Buu once more. He is the final antagonist of the original Dragon Ball manga.

Age: Hundreds of millions of years old (Has existed since time immemorial, making him older than even Beerus and the eldest Kais)

Powers and Abilities: Superhuman Physical Characteristics, Master Martial Artist, Accelerated Development (Training; Physical Stats, Abilities), Acrobatics, Magic, Ki Manipulation (Can be used defensively and offensively, to strengthen his skin or to fire ki blasts, which can home in on targets, and form defensive barriers), Ki Sensing (Can locate others by reading their ki), Immortality (Types 1 and 3), Regeneration (Mid-High; Buu can regenerate from being reduced to vapor), Self-Sustenance (Types 1, 2 and 3), Flight, Spaceflight, Telekinesis, Absorption (Can absorb others to gain their abilities and knowledge, increasing in power as well), Body Control (Due to his body's elasticity and amorphous nature, Buu can control it as he pleases), Duplication (Can split into distinct bodies and individuals through fission), Elasticity, Shapeshifting, Power Mimicry (Buu can copy techniques after seeing them once, copying Goku's Kamehameha and Kibito Kai's Kai Kai), Shockwaves Generation, Afterimage Creation, Air Manipulation (Can exhale with enough force to cause severe, powerful winds), Smoke Creation, Attack Reflection, Danmaku (Via Human Extinction Attack), Self-Destruction (Via Revenge Death Bomber), Healing, Transmutation (Can turn people into candy and other types of food), Teleportation, Dimensional Travel, BFR, Breath Attack, Can create dimensional rifts via Vice Shout as Super Buu, Explosion Manipulation (Via Super Ghost Kamikaze Attack), Can bind his opponents by creating Super Donut Chain, Possibly Telepathy and Sealing (Via Mafuba, after absorbing Piccolo), Sound Manipulation as Kid Buu, Resistance to Extreme Cold, Cosmic Radiations, Poison (Unaffected by poisonous chocolate) and Mind Manipulation (Babidi cannot reliably control Buu through any means despite the evil in his heart)

Stamina: Infinite, unless he fights another Buu or a copy of himself.

Intelligence: Buu's intelligence varies depending on his form. Innocent Buu is childishly oblivious and lacking in practical knowledge, and thus fails the qualification exam for the tournament between Universes 6 and 7. Despite this, he is incredibly skilled in combat and has a knack for mimicking ki techniques, even after only seeing them once. Kid Buu is monstrous and almost animalistic in intelligence but retains his skill in combat and in replicating other techniques. Super Buu is the most intelligent of Buu's many forms despite his apparent brutishness. He could count the number of humans remaining alive from Kami's Lookout and deduce the length of an hour by counting the number of sand particles in an hourglass and estimating how long it'd take for them all to fall. He even came up with a complicated plan to defeat Gohan after being easily defeated, even accounting for Gotenks' time limit after absorbing him, and became even more intelligent after absorbing Gohan and Piccolo, gaining their knowledge and skills.

Weaknesses: Majin Buu's energy can be worn out if he fights another Buu or a copy of himself. Innocent and Kid Buu are both fairly unintelligent and prone to fooling around in fights, taunting and mocking opponents rather than going all out and destroying them immediately. In all of his forms, Buu has a short temper and is easily angered. Buu is influenced by the personalities of those he absorbs, and as he absorbs more heroic individuals, he will become less villainous and more good-natured.

Ki: The fighting power and life force of a martial artist, a tangible energy derived from the user's vigor, courage, and mind. It can be used in several ways, such as to surpass the limits of one's body to greatly increase in strength, and it can be fired as blasts of energy or used to create defensive barriers. Buu possesses an immeasurable, unfathomable power that makes it extremely difficult to discern his true power, as it is never clear just how serious he's being or how much energy he is using. His skill in the use of ki allows him to easily replicate other techniques after seeing them once, copying Goku's Kamehameha and Kibito Kai's Kai Kai in this manner.

Magic: Buu knows several magical abilities that allow him to heal others and even turn them into sweets and other foods. He can heal any wounds so long as the person he is healing is not dead, even healing Babidi after he was cut in half and curing a boy of his blindness.

Majin Physiology: Buu has unusual, amorphous physiology that he can manipulate as he pleases, allowing him to stretch his limbs to extreme lengths, shape his body into bodies mimicking others, rip off chunks and use them to encircle and trap others, and even liquefy his own body before forcing himself into an opponent's orifices and expand, destroying them from the inside. His amorphous body is highly resistant to injury and can even split into various other bodies through fission.

Of the many unique abilities that Buu's body gives him, one of the most useful and powerful is his immense regenerative power. Even if he is blown to bits or reduced to vapor, Buu can regenerate rapidly, reforming his body from chunks of his body or even just pink gas. While this regeneration makes it incredibly hard to kill Buu, as he is worn down over time in combat, it becomes less effective and takes more time to fully trigger.

Notes: This profile strictly uses the original manga for scaling the characters. Please don't try to use feats or statements from Dragon Ball Kai to upgrade them, as Kai contains contradictions to the source material. Feats from the Dragon Ball Super anime are allowed for the relevant key.

Ganondorf (The Legend of Zelda) Ganon’s Profile (Speed was equalized)