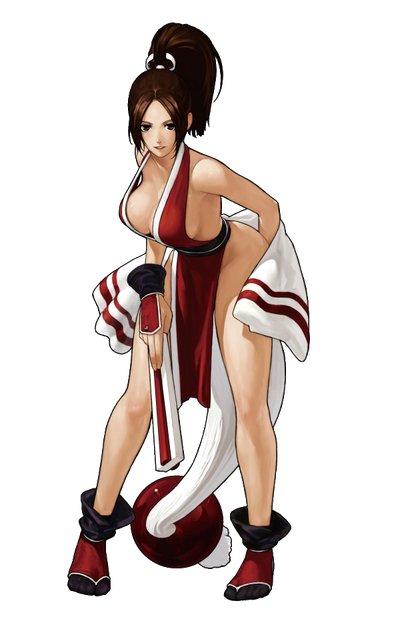 Mai Shiranui is the granddaughter of Hanzo Shiranui, master of ninjutsu and Koppo-ken. Mai learned from her father the secrets of Ninjutsu. She had met Andy Bogard, during this time, who had come to train under her grandfather. Mai then had to take alternate courses from her grandfather's friend, Jubei Yamada in ninjutsu. At first, Mai was uninterested in Andy and only thought of him as another callous man only interested in his training. It wasn't until he gave her a present on her birthday that she saw him in another light and eventually fell in love with him.

She spends much of the series endlessly pursuing Andy and fantasizing various daydreams about their wedding. When developers were asked about her whereabouts during Mark of the Wolves, they chose not to answer the question directly. However, they did divulge that she still loves Andy — as she always has — ten years later.

Powers and Abilities: Superhuman Physical Characteristics, Expert Hand-to-Hand/Ninjutsu Combatant, Weapon Mastery (Via her fans), Acrobatics, Hammerspace, Fire Manipulation, Levitation, Water Walking (Can walk on water), Surface Scaling (Is capable of climbing any surface thanks to her training in Shinobi-iri), Duplication (Can create doppelgangers/clones of herself via Bushin), Air Manipulation (Can produce miniature hurricanes via Blossom Storm), Explosion Manipulation (Can make her flames explode with some various moves), Stealth Mastery, Statistics Amplification (Can infuse her attacks with fire to increase her power), Resistance to Fire Manipulation (Can make herself resistant to fire via pyrokinesis)

Speed: Massively Hypersonic (Can keep up with the other characters and is likely faster than most)

Lifting Strength: Class 5 (Can throw people as large and heavy as Chang, who also carries a large iron ball)

Durability: Small City level+ (Takes hits from characters on her level. Was unharmed after being knocked into a freezing lake by Andy's Hishouken)

Stamina: High (Can fight even while heavily injured. Continued fighting Lien even after being hit hard enough that she was left coughing up blood)

Intelligence: Above Average (Has trained in many of Shiranui-Ryuu Ninjutsu's disciplines. Despite her ditzy personality, she is a capable warrior. Can also flawlessly disguise herself to resemble other people and even mimic their voices)

Weaknesses: Can be somewhat ditzy at times. Her cocky attitude during battle will often lead to her prolonging the fight (though she has shown that she knows when to drop it and get serious).