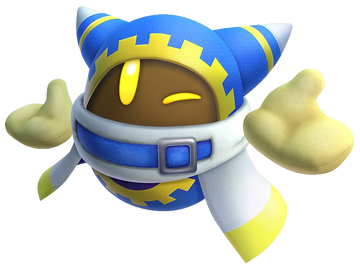 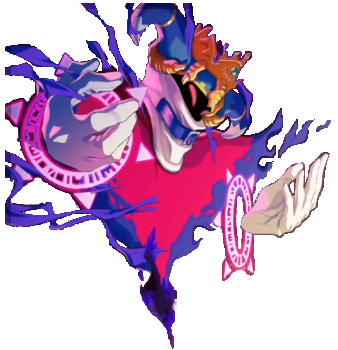 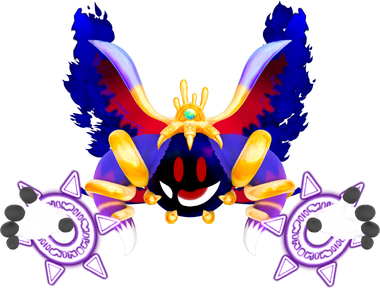 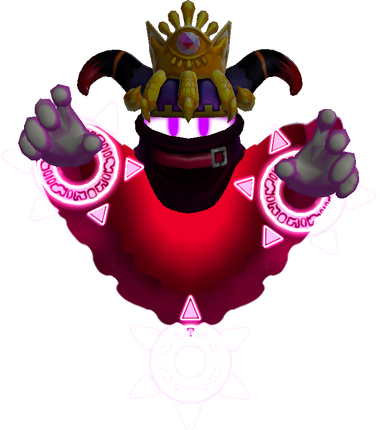 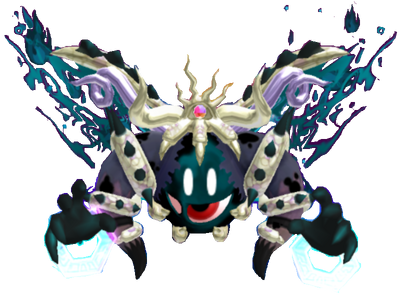 Magolor is an alien from the planet Halcandra that exists in Another Dimension, he acts as a supporting character and final boss during Kirby's Return to Dreamland, later becoming a friend and ally to Kirby & co.

He is introduced in the opening cutscene, making a crash landing on planet Popstar along with his ship, Lor Starcutter. Kirby, Meta Knight, King Dedede, and Bandana Waddle Dee offer to help fix the distraught alien's ship in order to help him get back home. Ecstatic, Magolor promises the group a trip to Halcandra, his home planet, once his ship is fixed. However, once reaching the planet, Magolor's true intentions are revealed, as he dons an immensely powerful artifact known as the Master Crown, granting him godlike power. The treacherous alien vows to take control of the entire universe, starting with planet Popstar. After the events of Return to Dreamland, Magolor returned and asked for repentance from Kirby, in which Magolor made Kirby an amusement park with no ulterior motives whatsoever.

Classification: Alien from Another Dimension, Inhabitant of Halcandra, Wizard, Pilot and owner of the Lor Starcutter | As before, Traitor | A sad shell possessed by the limitless power of the Master Crown, Manifestation of the Master Crown itself | As the first key, Star Ally (In Star Allies)

Powers and Abilities: Note that the distinction between his keys in this section is incomplete)

Superhuman Physical Characteristics, Non-Physical Interaction (Can affect Void Soul), Genius Intelligence, Toon Force, Regeneration (Mid in combat, possibly much higher over time. Like all Star Allies, he can quickly recover from being crushed flat, as well as having no notable damage after fighting Flamberge, who can impale and trap many foes at once like a shish-kebab using a sword covered in fire, before tossing them as projectiles surrounded by fire. Supposedly released unharmed from the Master Crown after his defeat in his 2nd form with it, and then he would turn into light & vanish, but he looked unconscious at the time, making the previous notion questionable; His body turning into light and vanishing seem more like his body turning into a soul and getting destroyed, which he came back from in a later game), Immortality (Type 3), Vehicular Mastery, Weapon Mastery, Magic, Flight, Energy Projection, Electricity Manipulation, Fire Manipulation, Intangibility (Seemingly passes through obstacles during his races with Kirby. Can turn into a small ball of intangible energy via Space Jump), Summoning (Can summon enemies, obstacles, an Ultra Sword and his Lor Starcutter), Control over the Lor Starcutter (Which has Energy Projection, Forcefield Generation, True Flight & Spaceflight, Air Manipulation, Danmaku, Time Travel [likely not combat applicable] and Size Manipulation), Teleportation, Aura, Spatial Manipulation & Creation (Created 2 pocket realms with multiple stars in small structures over unknown periods of time. Warps space when finishing using Dimensional Vanish, damaging nearby enemies. Able to help other Star Allies create Friend Stars, they are also able to create the Star Allies Sparkler by turning their desire to save everyone into it), Air Manipulation, Black Hole Creation, Forcefield Creation via Magic Barrier, Explosion Manipulation (Via Gem Apple Bombs, which he can endlessly generate and are detonated remotely), Resurrection (Able to revive others via Revival Spell), Empathic Manipulation & Morality Manipulation via Friend Hearts (Can turn enemies into allies. Able to overwrite Void Termina's effects on allies; Scales to his multi-galactic potency), Healing & Purification (Friend Hearts can be used to heal and purify others. Can "Revive" defeated allies, who are merely unconscious), Cloth Manipulation, Power Bestowal (Turning targets into allies gives them that same power. Can bestow electric, fire and air powers to others), Resistance to Morality Manipulation & Empathic Manipulation (Unaffected by the presence of the individual Dark Hearts), Transmutation (Like all Star Allies, he isn't transmuted after being cooked inside Chef Kawasaki and Cook Kirby's pot, process that regularly turns foes and items into food), heat and cold (Unaffected by the temperatures of Blizzno Moon and Star Lavadom), Black Holes (Able to outrun and withstand black holes from Marx)

As before, Resurrection (3 Gem Apples can be used to revive and fully heal their user & his allies, Magolor should be able to utilize this function of them. As a seller who gains them as currency in a worldwide known Shoppe, he should have more than a member of Team Kirby, who can own hundreds of them), Summoning (Can summon Helpers by directly throwing Friend Hearts to Copy Essences. Can summon a Dream Friend using the Dream Rod), Statistics Amplification (With Power-Up Hearts, which increase strength, health or speed of all allies at once), Healing (With various food items. All health healed with Power-Up Hearts & Gem Apples), Invulnerability with Invincibility Candy, Homing Attack (With Star Allies Sparkler)

Same as previously, but to a greater extent, Regeneration (Mid-High), Life Manipulation (Created enemies and objects to telekinetically throw towards his enemies), Weapon Creation & Mastery

Attack Potency: Multi-Solar System level (Able to contend with Kirby in races. Created 2 pocket realms with multiple stars in small structures over unknown periods of time), able to negate durability in some ways. Multi-Solar System level with the Lor Starcutter | Multi-Solar System level (Able to bend the fabric of parts of Another Dimension to his whim), higher with EX form (Drew more power out of the Master Crown), can ignore durability with a good portion of his attacks | Multi-Solar System level (Able to rip open black holes potent enough to swallow the whole battlefield, including the massive portal in the background, which had several stars in it. Capable of turning the fabric of the universe itself into a weapon. Able to turn the screen upside down, including the background. His defeat caused the destruction of interstellar parts of the reality where he was, including the zone where his fight took place and the 15 areas where the Sphere Doomers were fought in Return to Dream Land, when each of them had multiple stars, as well as at least 4 nebulae in total [See note below]), can ignore durability with a good portion of his attacks | At least Multi-Solar System level (Can assist Kirby & 2 fellow Star Allies in the defeat of Void Termina, Corrupt Hyness, the retaliators Three Mage-Sisters [at once], Morpho Knight EX and the stronger incarnations of Void Termina), able to negate durability in some ways

Speed: Massively FTL+ (Keap up with Kirby in several races; Comparable to the Warp Star [196172280675748830c]. Can keep up with fellow Star Allies such as Meta Knight, King Dedede, Bandana Waddle Dee, Gooey, Ribbon and the Three Mage-Sisters, and they are comparable to Morpho Knight and Void Termina, with whom they can fight. Along with the other Star Allies, he can chase and keep up with the Jamba Hearts several times, which were suddenly scattered across the universe). Massively FTL+ with the Lor Starcutter | Massively FTL+ (Outpaced Landia while flying backwards and making the stars blur behind them. Blitzed Kirby, Meta Knight, King Dedede, and Bandana Waddle Dee with projectiles. Reacted to an attack from Kirby while weakened), higher in EX form | Massively FTL+ (As before)

Intelligence: Genius. Repaired and updated the Lor Starcutter, a futuristic vehicle created by The Ancients, later repaired it again after having it destroyed by Landia in their first battle. Knew how to create pocket reams of various sizes within small structures, similar to those the Lor Starcutter has in it, he used this knowledge to make multiple theme parks and attractions in different worlds. The many traps he incorporated in this theme parks make his most difficult challenges being seen as challenging for King Dedede and Kirby. Magolor is a very smooth talker who is talented at using others to achieve his goals, even managing to dupe Meta Knight, who has been proven to be incredibly alert to threats, given the events of Amazing Mirror and Squeak Squad. Has a lot of knowledge on The Ancients and their creations. Possesses vast combat skills due to being able to contend with, and defeat, Meta Knight, Hyness and Void Termina

Note 1: Another Dimension's size as a universe in Return to Dream Land is acknowledged, but there is not evidence of Magolor affecting all of it as opposed to interstellar parts of it. Given Another Dimension's portrayal as a multiverse in Star Allies, it's possible for the areas where the Sphere Doomers were fought to be separate universes. This would exponentially increase the power and speed of many characters in the verse, but the matter remains unclear until a confirmation may arrive.

Note 2: Contrary to popular belief, Magolor was never send into a "dimension beyond space and time" after his defeat in Return to Dream Land, said description refers to the same dimension where his fight took place, Another Dimension, which in turn completely lacks the minimum requirements needed to truly be beyond space and time or transcend those 2 concepts. Instead, Another Dimension has space and time, but the latter happens differently there and this was expressed in a poetic way.

Specials gems that grow on trees and have a number of uses. Most notably, Team Kirby can use them in combat to instantly revive and heal their whole group when they all die, only wasting 3 of them. The Gem Apples are used as currency and as Magolor is the only employee of his Shoppe, which he describes as "number one in the whole Dream Kingdom", this should imply that he has access to hundreds of them, such like a singular member of Team Kirby but on a higher scale. Magolor also uses his Shoppe to repeatedly sell and negotiate stuff with Kirby, and should be able to use all of the Gem Apples' functions, which possibly act on their own.

When collected, Magolor becomes invincible for a short time, and almost any enemy he touches will be instantly defeated, or at least damaged.

The Final Weapon in Star Allies, used to take out Void Termina. The Star Allies Sparkler fires projectiles from the tip, fly around quickly and efficiently, and spin counterclockwise to avoid all damage on a relative scale (Sparkler Turn). Kirby canonically took the lead in the center of the Sparkler while his friends rode in the tail, but the leader can be rotated to imbue the shots with a different element depending on the leader (the technique is called Rider Switch). The Sparkler can fire different homing projectiles with varying power depending on charge time. An uncharged shot is called the Sparkler Comet, and it fires a star-shaped projectile. A charged shot is called the Sparkler Starshot, and it fires a projectile shaped like two intertwining stars. The strongest attack is called Team Star Allies!, which, if everyone who's riding charges together and releases at the same time, fires a giant laser at the opponent. Magolor uses this item on his own when used in The Ultimate Choice of Star Allies.

Kirby's Return to Dreamland - Under My Control

Magolor as the appeared in Team Kirby Clash Deluxe

One of Magolor's pause screen descriptions in Star Allies. There is a mistranslation in the part that says "galaxy", the original kanji says "universe" (宇宙) 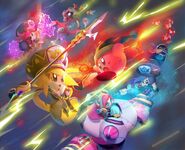 Marx (Kirby) Marx's profile (Note: Both were in base forms, bloodlusted and speed was equalized)