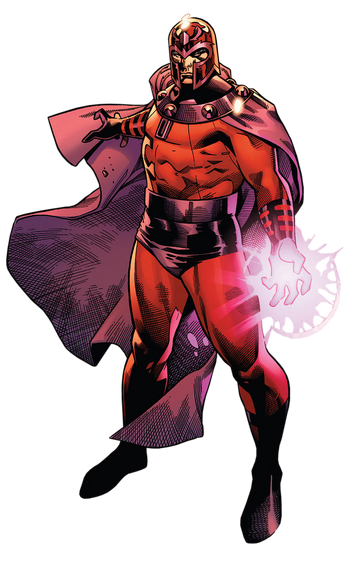 Max Eisenhardt, better known as Magneto, is one of the most powerful mutants in the world and a recurring foe of the X-Men. After suffering from countless tragedies throughout his life, he became determined to end humanity's oppression of mutants by upending the human-led governments of the world.

Tier: 9-A physically, 5-B with powers

Attack Potency: Small Building level physically (Beat the Red Skull to death with his bare hands. Can easily destroy furniture with his blows and fight against entire armored convoys, even breaking part of their helmets), Planet level with powers (Stopped and reversed a giant planet busting bullet, has control of the entire planet's electromagnetic field)

Speed: FTL reaction speed (Can deflect photons and light from close range. Able to catch the likes of Northstar and Quicksilver, who can run at these speeds)

Lifting Strength: At least Class 1 (Lifted a massive portion of a broken wall to kill Red Skull. Can snap necks with his bare hands. Held his own against several peak-bodied mutants, with one of them commenting Magneto being "all muscle"). Class T with magnetic telekinesis (He was able to lift an entire mountain with his magnetism due to it containing iron ore)

Striking Strength: Small Building Class (Comparable to other mutants, beat Red Skull to death with his bare hands without using his powers. Once smashed through a table with no effort at all), Planet Class with his abilities

Durability: Small Building level physically (Should scale to his own striking strength), Planet level with his shield

Stamina: Very high. Even in old age he is capable of holding his own against an entire convoy of soldiers and handily defeat them without fail, and is quite nimble despite his looks. Several more muscular mutants even once noted him to be made of pure muscle and still couldn't knock him out with their strongest hits

Standard Equipment: His armor, including (in some incarnations) his helmet which helps block telepathic attacks

Intelligence: Extraordinary Genius, capable of creating advanced technology and is a master geneticist, has built space stations, robots, advanced weaponry, genetically engineered super-powered creatures, and many other things, he is also a master combat strategist and tactician capable of ruling his own nation, and he can easily hold his own against multiple highly-trained soldiers with nothing but his bare hands

Weaknesses: Manipulating energies instead of magnetism can take a toll on his body, When severely injured, his body is unable to withstand the strain of manipulating great amounts of magnetic forces. He is unable to manipulate vibranium