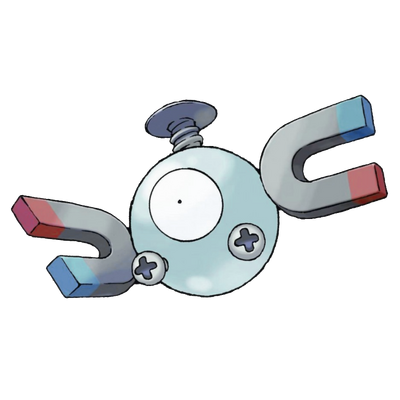 Magnemite is born with the ability to defy gravity. It floats in air on powerful electromagnetic waves and discharges electricity from two side-mounted units. The electricity emitted by the units on each side of its body cause it to become a strong magnet, and the faster the units at its sides rotate, the greater the magnetic force they generate. They generate enough magnetism to draw in iron objects from over 300 feet away. It often appears without warning and uses Thunder Wave and similar moves. It evolves into Magneton starting at level 30. 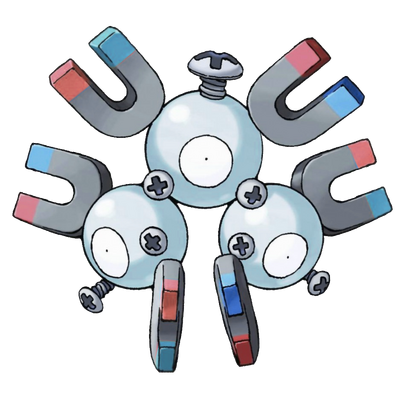 Magneton is formed by several Magnemites linked together when the number of black spots on the sun increases. The Magnemite are united by a magnetism so powerful, it dries all moisture in its vicinities and causes earaches to those who get too close to it. It generates powerful radio waves that raise temperatures by 3.6 degrees F within a 3,300-foot radius and emits a powerful magnetic force that is fatal to mechanical devices, electronics, and precision instruments. As a result, large cities sound sirens to warn citizens of large-scale outbreaks of this Pokémon and people are warned to keep this Pokémon inside a Poké Ball. When many Magneton gather together they can set off a magnetic storm that disrupts radio waves. It evolves into Magnezone when leveled up in either Mt. Coronet, Chargestone Cave, Kalos Route 13, or on New Mauville. 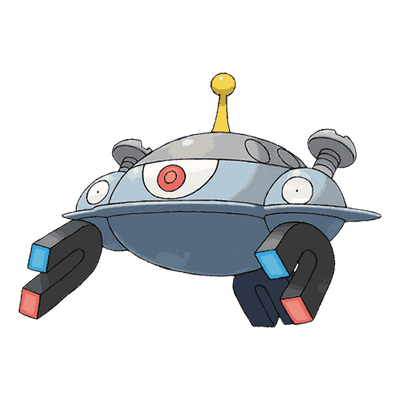 Magnezone is the result of a Magneton that had its molecular structure altered from exposure to a special magnetic field. Sometimes the magnetism emitted by Magnezone is too strong, making them attract each other so they cannot move. A group tried to use scientific means to make Magnezone evolve, but their efforts ended in failure. It is the final evolution of Magnemite.

Magneton and Magnezone Only