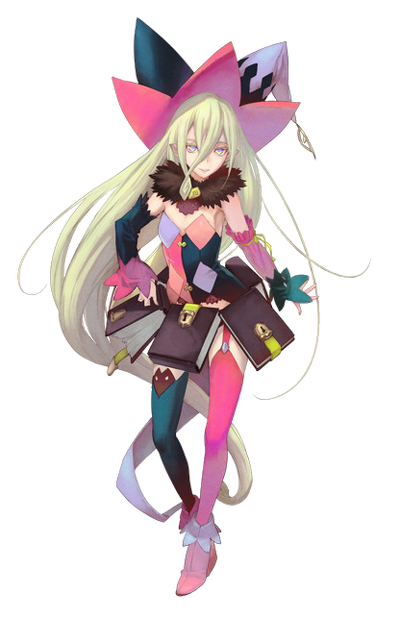 Magilou (マギルゥ Magiruu) is a main character and protagonist in Tales of Berseria. Magilou is a witch locked up in the Island Prison Titania when she meets Velvet Crowe and Rokurou Rangetsu and escapes the prison with them. During the first act of the story, Magilou spends her time searching for a "traitor", which later turns out to be her former Malak Bienfu, after renewing her pact with him, she begins fighting alongside the party. In truth, Magilou is a former member of the Exorcist's Abbey and former student and adopted child of Melchior Mayvin, known as "the lost legate" and having left the Abbey after failing Melchior's final test.

Stamina: Very High (Can withstand her heart being crushed dozen of times and even fighting normally after that)

Intelligence: Gifted (Skilled magician, knowledgeable about many subjects, including the nature of the world and humanity itself)

Weaknesses: She tends to play around and not take things seriously