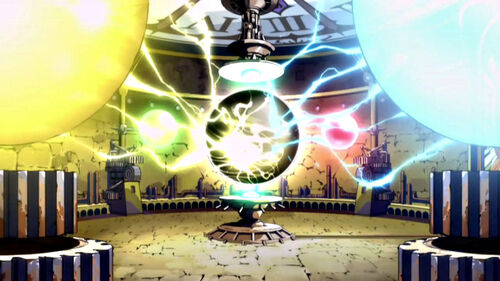 The Magical Convergent Cannon: Jupiter is a powerful weapon feared by all. When fired, the cannon releases a compressed beam of energy that wreaks destruction wherever it passes. One blast from the cannon was enough to completely shatter Erza Scarlet's Adamantine Armor, an armor renowned for its extremely high defensive capabilities, to pieces. Had the armor not intercepted the blast, members of Fairy Tail feared that one blast from the cannon would be enough to completely annihilate their guild and the surrounding area. Additionally, the Magical Cannon has enough power to significantly damage a Giant-empowered Makarov Dreyar, who, in that form, is well known for his enhanced strength and durability; a further testament to the overwhelming destructive capabilities that Jupiter possesses.

During the attack on Fairy Tail by the Alvarez Empire, Bisca utilizes Phantom's Jupiter in an attempt to destroy the lead ship. While it is blocked by Ajeel, the cannon beam refracts around his hand, destroying numerous surrounding ships.

Range: Around a kilometer

Fairy Tail's Version
Add a photo to this gallery