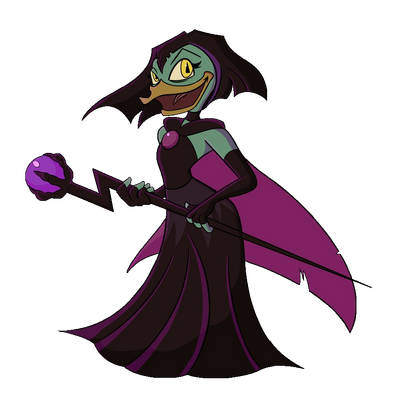 Magica De Spell is an evil sorceress, and one of the primary antagonists of the 2017 reboot of Ducktales. An arch-enemy of Scrooge McDuck, she was sealed away for many years in Scrooge's Number-One Dime. However, before she was sealed, she created Lena to enact her revenge for her, as she became a literal shadow of her former self, and posed herself as Lena's aunt. Upon the solar eclipse, she succeeded in freeing herself from the Dime and entrapping Scrooge within it instead, and may have succeeded in tearing down everything he cared for if not for his family and friends intervening and successfully destroying Magica's source of power.

Powers and Abilities: Superhuman Physical Characteristics, Weapon Mastery (Temporarily fought against Scrooge McDuck with her staff), Magic, Possession (Possessed Lena into doing her bidding despite her resistance), Darkness Manipulation (Created Lena from a shadow and controlled the shadows of everyone in Duckburg), Energy Projection, Forcefield Creation, Telekinesis, Flight, Familiar in multiple curses | Likely none

Speed: Massively Hypersonic (Fought alongside Flintheart Glomgold, The Beagle Boys and against Scrooge and his family even without her magic) | Unknown, possibly at least Superhuman with flight, with Massively Hypersonic combat speed and reactions (Likely superior to base)

Lifting Strength: Regular Human (Lifted up Launchpad) | Above Average Human, at least Class 25 via telekinesis (Should be superior to base)

Stamina: Unknown | High (Fought with Webby and the triplets for an extended period of time)

Intelligence: High (Is versed in many different kinds of magic and dark arts, and is likely more knowledgeable about magic than Scrooge himself. Created Lena just before she was sealed, almost managed to destroy Duckburg with the residents' own shadows, had a shadow take the Gizmoduck suit, and took advantage of the split McDuck family)

Weaknesses: Her staff appears to be the source of much of her power, and can be destroyed. Out of touch with with the modern age, and can be fooled due to this | The Number-One Dime can be disarmed from Magica, which will reduce her power to base, and if she hits it with a magic blast, it will release Scrooge, rendering it useless | Same as before and very weak