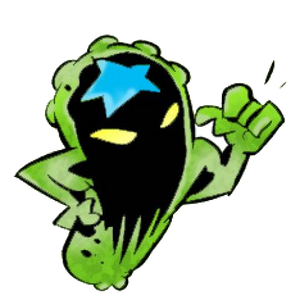 In 1951 Dr. Jekyll Formaldehyde accidentally dropped his lunch into the path of an Experimental Particle Comfabulator, genetically modifying the pickle, the pickle instantly became intelligent, grew overdeveloped muscle structures and gamma-enriched vinegar flowed through his veins. He was then vigorously trained to be an elite crime-fighter seeking Dill Justice known as the Magic Pickle, or his code name, Agent Kosher. The doctor was desperate to duplicate the accident, so he put more produce in the comfabulator, but something went horribly wrong. The produce came out with a skewed moral compass and became notorious villains known as the Brotherhood of Evil Produce. It would become Magic Pickle's main mission to stop them once and for all.

Powers and Abilities: Superhuman Physical Characteristics, Summoning (Magic Pickle can summon The Processor from any distance by sending brainwaves from his head star to the latter's star receiver), Flight, Energy Projection, Gamma/Radiation Blasts, Radiation Resistance and Expert in Hand-to-Hand Combat

Attack Potency: Wall level (Casually busts through floors and walls; can blast sewer grates a couple of feet in the air)

Speed: Athletic Human to Peak Human (Travelled about 9 meters almost instantaneously; the average pickle is about .06 meters in length)

Striking Strength: Wall Class (Casually busts through floors and walls; launches produce and creatures larger than him across rooms with his punches)

Durability: Wall level (Can survive going through walls and getting launched from Wall level attacks)

Intelligence: Above Average (Great tactician and problem solver in combat)