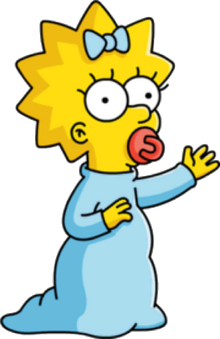 Maggie Simpson is one of the main protagonists of The Simpsons. She is the daughter of Marge Simpson and Homer Simpson. She is 1-year old and their youngest child. Most of the time, Maggie is seen chewing on her pacifier or attempting to walk. She mostly seems like an innocent and sweet baby who just wants her family to stay happy, to learn, and to suck on her iconic pacifier. However, she also on some occasions shows far more self-awareness than she lets on. Several times having wielded different guns, intentionally tried to shoot Mr. Burns a second time, saving her family from The Mob, and several other threats.

Powers and Abilities: Superhuman Physical Characteristics, Toon Force, Weapon Mastery (Knows how to handle and use several guns), Is a very capable fighter, Minor Acrobatics, Social Influencing (Often uses her cute and innocent look to manipulate others to get her way, her smile caused several mob members to put down their guns, Simply by looking sad, she pacified a mob of people being offered a large amount of money for the bear she had), Empathic Manipulation (By being in a church seat, she removed all hate and brought peace around the entire world), Teleportation (seen here), Preparation, Extrasensory Perception (Can see and interact with Ghosts), Animal Manipulation (Has communicated and gotten animals to save her dog. Seemingly tamed some bears into taking care of her just by being there), Body Control (Can twist her entire head around with no side effects), Stealth Mastery (Has shown to be extremely stealthy, Often times is sneaking out of her family's view of house), Pressure Points (Has incapacitated Carl while using a knife, can touch someone on their back in such a way it forces them to burp), Fourth Wall Awarness, Resistance to Electricity (She and her family took electric shocks that were strong enough to cause Springfield's power to flicker)

Speed: Unknown while crawling, Supersonic combat speed (Can fight with Bart, Capable of fighting people as fast as Homer)

Lifting Strength: Class 50 (Has lifted Homer without effort on a few occasions, moved a giant rock by herself, threw off a baby who was able to restrain Bart. Stronger than a baby who could overpowered and beat up Homer. Can easily push cars)

Stamina: Very high (Has been shown to save Homer or beat someone up without effort, crossed through a long and frozen climate without rest, comparable to Spider-Pig)

Standard Equipment: Pacifier, A Knife, Her Glass bottle, Her Teddy Bear which hides a Dagger

Intelligence: At least Above Average, possibly Gifted (Far superior to other infants. Shows good ability in using guns, is a very skilled fighter, Has saved the family on many different occasions, once put together a group of animals to fight against Cletus and his several kids and save Santas little helper, has shown to adapt quickly, understands human interactions/emotions, displays some sort of self awareness. Can understand several if not all animals, snuck into a daycares office, stole their keys, and gave all the babies their pacifiers back without getting caught)

Weaknesses: Still a baby and can get easily distracted