Magellan (マゼラン, Mazeran) is the vice warden of Impel Down. He was formerly the chief warden, but after his failure to stop the jail's one and only mass-breakout, he was replaced by Hannyabal and demoted to vice warden. He was the main antagonist during the Impel Down Arc.

Powers and Abilities: Superhuman Physical Characteristics, Master Hand-to-Hand Combatant, Weapon Mastery, Poison Manipulation (Has the ability to produce and control different types of poison), Sense Manipulation and Statistics Reduction (Can breathe out a poison cloud around his enemies, robbing away their sight, hearing and sensations in their hands, slowly weakens them as well), Corrosion Inducement via Acid Manipulation, Breath Attack (Capable of firing gases and acidic discharges from his mouth), Paralysis Inducement and Pain Manipulation (Via Hydra Poison), Status Effect Inducement (Can utilizes a tear gas, which causes uncontrollable sneezing & makes the eyes water and itch), Large Size (Type 0), Immunity to all forms of poisons, Resistance to Heat Manipulation and Ice Manipulation (Was relatively unfazed by the boiling temperatures of Levels 3 and 4 or the sub-zero temperatures of Level 5 in Impel Down)

Attack Potency: Unknown (Is the warden of Impel Down, meaning he must maintain order and keep powerful characters from escaping, and he was shown fighting on par with Monkey D. Luffy, though this may be due to the development of the plot. He also defeated Emporio Ivankov, and single-handedly incapacitated the Blackbeard Pirates), his poison ignores conventional durability

Durability: At least Small City level (Was unharmed after the Impel Down arc, despite taking hits from Ivankov and Gear 2nd Luffy), also due to being able to cover all of his body with poison at will, making it hard to land a physical blow on him, Venom Demon makes him absurdly difficult to even touch

Stamina: Very high (Didn't show any signs of fatigue during the Impel Down Arc)

Range: At least several dozens of meters with his poison attacks

Intelligence: Although he is only active as a warden for about four hours a day due to his condition, Magellan has been referred to as Impel Down's most reliable man and rendered Impel Down virtually impenetrable and inescapable over his twenty year career until Luffy's successful escape attempt with the aid of various other prisoners. He has full mastery over his powers and is able to take on dozens of opponents at once with the effects of his poison. In addition, he is able to fight on par with Shiliew, who would later go on to become one of Blackbeard's most trusted crewmen. Magellan is also utterly ruthless to his enemies due to his pride in his reputation and will execute them as he sees fit without hesitation

Weaknesses: General Devil Fruit weaknesses. Certain non-organic materials, such as Mr. 3's wax, are a little bit resistant to most of the poisons he produces. If he consumes it, he gets diarrhea that usually has him confined to the bathroom for most of the day

Doku Doku no Mi (Venom-Venom Fruit): A Paramecia-type Devil Fruit that grants the user an ability to produce and control different types of poison, which can be as simple as breathing out minor poison gas, or as complex as being concentrated and corrosive indigo-colored liquid produced directly out of their own body, as well has grant immunity to all forms of poison. The user appears to have full control of any poison they release, whether it be in liquid or gaseous form. 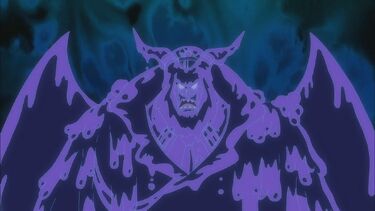 Hiei (Yu Yu Hakusho) Hiei's profile (Mastered Dark Dragon Hiei was used, speed was equalized, they started at 10 meters from each other)