Mafuga (マフーガ) is the primary antagonist of the movie Doraemon: Nobita and the Windmasters and its manga adaptation.

In a country hidden away from all other countries of Earth by great mountains, there exists a race of humans that utilise winds as their main source of power. The race is divided into 2 tribes constantly at odds, the peaceful Wind Tribe and the violent Storm Tribe. One day, the leader of the Storm Tribe, Uranda, created a wind dragon of immense power named Mafuga, and planned to use it to conquer the world. His ambition was thwarted by Noajin, the heroic head of the Wind Tribe, who created a legendary sword which he used to slay both Mafuga and Uranda. Mafuga's body was divided into 3 pieces sealed in 3 spheres: The body and the tail buried deep in the mountains along with Uranda's body, and the head sealed by the same sword on Mafuga Island in the Doldrums.

In the 22nd century, Storm, a villainous archaeologist, discovered Uranda's pendant with the message that Mafuga would be resurrected and would destroy the world at the end of the 20th century. He thus travelled back in time and posed as the new leader of the Storm Tribe, succeeding in releasing Uranda's vengeful spirit and sealing it in a 4-dimensional PET bottle after Uranda fulfilled his task of resurrecting Mafuga.

Restored, Mafuga wreaked havoc, effortlessly defeating Doraemon. Even the legendary sword that slew it before merely separated the tail, Mafuga's least hostile and powerful body part, before the dragon regenerated into a smaller but even more violent being. However, the sentient tail, befriended and named Fuuko by Doraemon's group, absorbed the thermal energy of the Mafuga Island's volcano and the wind energy of both the Wind and Storm Tribes, before creating a storm that rotated in the opposite direction of Mafuga's, sucking in the dragon and completely dispelling it at the cost of her own life.

Powers and Abilities: Superhuman Physical Characteristics, Air Manipulation, Weather Manipulation, Flight, Large Size (At least Type 2, possibly Type 3 [Its head alone is at least 100 meters in length]), Regeneration (High-Mid; regenerated from being blown into pieces by Doraemon, and later regenerated from being cut in 3), Immortality (Type 3), limited and not combat-applicable Duplication (When cut into pieces by external forces, Mafuga can regenerate from just the head and the body into a smaller but more violent version of the dragon, leaving the tail as a sentient separate being)

Attack Potency: Multi-Continent level (By merely awakening, it could create a continent-sized storm)

Durability: Multi-Continent level (Even after losing some of its powers due to losing the tail, a storm of equal or greater potency to its continent-sized storm but in the opposite rotational direction was required to suck it in, destroying it). Regeneration also makes it difficult to kill

Stamina: Extremely high (Legends stated that it could rampage for 40 days straight)

Range: At least Hundreds of meters via sheer size. Thousands of kilometers via weather manipulation (Its awakening created a storm that can be seen in outer space)

Weaknesses: If a storm of equal potency to its own but in the opposite rotational direction is created inside its own storm, Mafuga will be sucked in and dispelled, unable to regenerate. Fuuko and Gorado could not fuse when the head was still sealed, indicating that if cut into pieces, Mafuga cannot regenerate if the head is sealed (However, as it took an attack that blew it up head on and regenerated moments later, destroying Mafuga's head when the dragon is whole will only have the same effect as attacking the rest of its body). Mafuga's tail is not only non-hostile but also sentient, and if separated could rebel against it (However, without being boosted by external power sources, its powers are inconsequential compared to Mafuga's)

The red sphere containing Mafuga's head, sealed by the very sword that slew it

Fuuko (in the guise of a stuff animal) captured by Gorado, Mafuga's sentient body, second in hostility only to the head

Mafuga regenerating after Doraemon blew it into pieces

Mafuga regenerating from its head and body 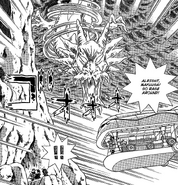 Mafuga in the manga adaptation
Add a photo to this gallery