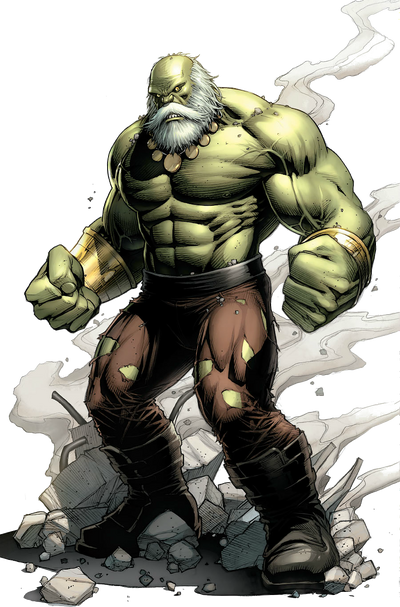 Approximately a hundred years into the future, a nuclear war has killed almost all of Earth's superhumans and has taken the world to the brink of extinction. A future version of the Hulk, called Maestro, has seized control, driven insane by the nuclear radiation he has absorbed and the bitterness he feels towards the world at his continued treatment. He has the intelligence of Bruce Banner and the absorbed radiation has significantly enhanced his strength.

Attack Potency: Solar System level (Beat his past self in a fight)

Speed: At least High Hypersonic, with at most Massively FTL+ combat speed and reactions (Comparable to his past self)

Durability: Solar System level (Withstood hits from his enraged past self)

Stamina: As long as he remains angry, it is virtually limitless

Range: Extended melee range due to his size. Thunderclaps can reach up to kilometers in every direction. By attacking the ground, he can reach potential planetary range.

Intelligence: Extraordinary Genius (He has the same intelligence as his past self)

Weaknesses: None notable (Unlike his past self, he can control when he turns back into a human)