Madmole (マッドモール Maddomōru) is a Fifth Generation Dragon Slayer and member of Diabolos, a guild of dragon eaters.

Attack Potency: Island level (Stated to be comparable in power to Base Natsu)

Speed: Sub-Relativistic (Kept up with Natsu)

Armor Dragon Slayer Magic (鎧の滅竜魔法 Yoroi no Metsuryū Mahō): Madmole is able to use this Magic that allows him to gain the abilities and characteristics of an Armor Dragon. With this Magic Madmole becomes durable enough to be able to receive any attacks targeted at him while also not feeling any pain, as well as able to materialize armor-like substance such as passageways on water to cross on. 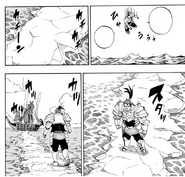 Armor Dragon's Steel Fist
Add a photo to this gallery

Retrieved from "https://vsbattles.fandom.com/wiki/Madmole?oldid=5722091"
Community content is available under CC-BY-SA unless otherwise noted.