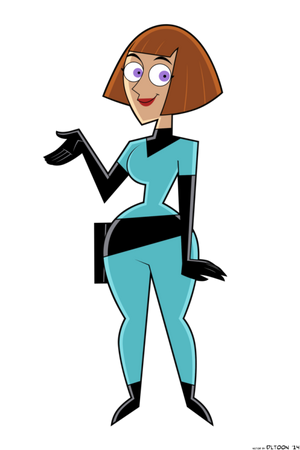 Maddie Fenton is the wife of Jack Fenton and mother of Danny Fenton and Jazz Fenton. Unlike her husband, she is a very skilled ghost hunter and inventor, capable of fighting several ghosts on her own and help make several of the Fenton's gadgets and more.

Sealing (The Fenton Thermos can seal ghosts/spirits inside it), Energy Projection (Energy Weapons), Ectoplasmic Energy Absorption (The Fenton Weasel can absorb ambient ghost energy), Statistics Amplification (Ghost Gloves boost the wearers strength), Electricity Manipulation (The Jack o Ninetails fires cables that wrap around the target and electrocutes them, The Specter Deflector electrocutes any ghost that touches the person wearing it), Extrasensory Perception (The Booo-merang can lock on to a ghosts unique energy and track it), Power Nullification and Forcefield Creation (The Specter Deflector protects the wearer from ghost abilities by negating them and can create a thin shield around the wearer that repels ghosts), Portal Creation and BFR (The Fenton Bazooka fires a blast that creates a portal to the Ghost Zone and sucks up any ghost too close to it), Matter Manipulation and Durability Negation (The Fenton Peeler can fire wide beams of energy that tare ghosts apart on an atomic level), Ice Manipulation (The Fenton RV has a built in ice ray)

Lifting Strength: Athletic Human | Class 5 (Comparable to ghosts who can easily lift trucks above their heads and toss them with ease)| Class K (Comparable to Jack who could drag a monster the size of a small building)

Stamina: Superhuman (Could fight several ghosts at the same time without getting tired)

Intelligence: Extraordinary Genius (Created the Fenton Ghost Portal, several Anti-Ghost weapons that are capable of ripping ghosts apart atom by atom or nullify powers, created and can operate several different vehicles like the Ghost Assault Vehicle and the Fenton Jet, she is also an expert ghost hunter)

Weaknesses: Most Anti-Ghost devices have little to no effect on anything other than ghosts/spirits.