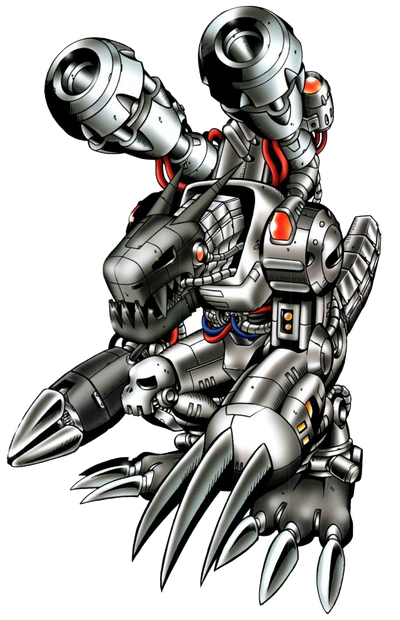 Machinedramon (known as Mugendramon in the Japanese version) is a Machine Digimon. His whole body in 100% full metal, Machinedramon is an artificial Digimon built from the parts of various Cyborg Digimon who are assumed to been prototypes for his completion. Machinedramon's power is at a level that would overwhelm other Digimon with intellect which boasts incomparable throughput despite acting his on whim of his DigiCore, the source of his power, which is filled with evil intentions. Machinedramon is one of the four Dark Masters who ruled the Digital City on his quarter of Spiral Mountain. After the DigiDestined split up, Taichi's group ended up in Machinedramon's city and managed to defeat him with help from Andromon and the Numemon. In videogame sidestories, Machinedramon's remains are hinted to have combined with those of Chimeramon to become Millenniummon who played a role in Ken Ichijoji's transformation into the Digimon Emperor.

Attack Potency: Galaxy level (Comparable if not superior to other Mega Digimon such as WarGreymon) | Complex Multiverse level (It has infinite destructive power, comparable to other members of the Dark Masters. Considered equal to the Four Holy Beasts and was responsible for defeating and sealing one of them. Controlled some of the power guaranteed by the Nanomon program, controlling the entirety of the Digital World and reshaping it to form the Spiral Mountain, becoming linked to 1/4 of the entire Digital World corresponding to the Power of Cities/Metal)

Speed: Relaticistic+ with FTL reactions (Should be comparable to other Mega Digimon such as WarGreymon) | Immeasurable (Comparable to Piedmon)

Lifting Strength: At least Class M+ (Able to easily overpower Andromon while walking through several hundred tons of bedrock and concrete, should be at least comparable to WarGreymon in strength) | Immeasurable

Intelligence: Varies among the species | Is the second biggest of the Dark Masters, knows nearly everything about the Digiworld and the Digimon which live in it. Has extreme technological prowess that allows for superb hacking skills and more. An extremely adept combatant, with superb overall combat intelligence.

Start a Discussion Discussions about Machinedramon