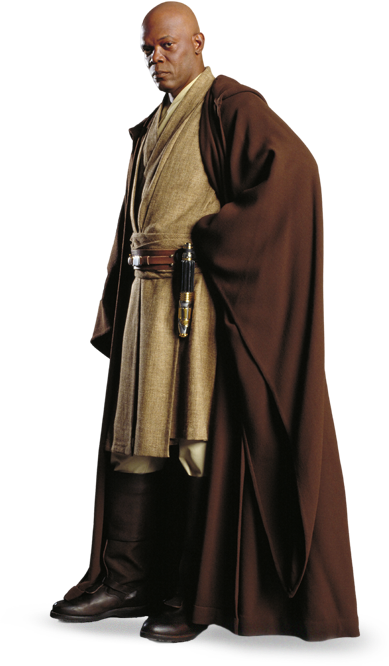 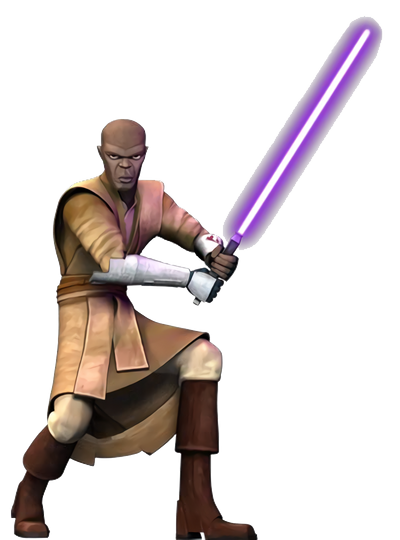 Mace Windu was a Human Jedi Master and arguably the Jedi Order's greatest warrior during the Clone Wars. A master of every single form of lightsaber combat and numerous aspects of the Force, only Jedi as powerful as Grand Master Yoda could call themselves his peer in battle. As such, he commanded incredible influence over the Jedi Council and subsequently the Jedi Order itself. A cautious and wary individual, he was opposed to Anakin Skywalker's acceptance into the Jedi Order and was doubtful of the prophecy that indicated the young Skywalker as the Chosen One. Nevertheless, Windu served the Jedi Order faithfully until his final moments, when he was struck down by Darth Sidious with a burst of Force Lightning after the latter convinced Anakin to cut off Windu's hands, ultimately confirming the Jedi Master's initial suspicions about the darkness in the boy's heart.

Classification: Senior Jedi Master/Master of the Order/High General of the Republic

Powers and Abilities: Superhuman Physical Characteristics, Precognition, Force-enhanced reflexes/reactions, Clairvoyance, Telepathy, Psychometry, Telekinesis, Telekinetic blasts and shields, Aura sensing, Enhanced Senses and perceptions (Cross-dimensional), Mind/Memory Manipulation, Various lightsaber combat skills, Skilled swordsmen (His "Superconducting loop" allows Windu to redirect actions with Vaapad, his personal combat form), Skilled unarmed combatant, Energy Manipulation (Can reflect, redirect, and absorb energy attacks thrown at him), Regeneration (Mid-low; via Force Healing), Battlemind, Force Stealth, Shatterpoint Perception (Allows one to view the fault lines in fate or in reality that tells or shows a weakness in something and how to counter it as well as function as a higher level or more flexible version of precognition, as well as showcasing one's or others fate's or how its connected to actions or manipulations), Can channel the aggression of himself or others into power via Vaapad, dubbing it himself as the "Superconducting loop" | As before, Purification (Shown here)

Attack Potency: At least Island level (Considered one of two people [himself and Yoda] at the time of Revenge of the Sith that could contend with Darth Sidious per Word of God. Fought evenly against Sidious in a prolonged duel and even came out on top) | Solar System level (Repeatedly stated to be second only to Yoda in the Jedi Order, and was stated by George Lucas that only the two of them could contend with Darth Sidious. The latter was proven when Windu bested the Sith Lord in a duel and deflected his Force Lightning, with Sidious having been confirmed to be going all out. Traded blows with Mother Talzin, who is stated to be a peer of Darth Sidious)

Speed: Subsonic running speeds with Force Speed (Should be faster than the likes of cybernetic Vader who was able to move at such speeds aboard the Star Destroyer Perilous. Can keep up with Darth Sidious, who can move at such speed as to be a blur), Massively Hypersonic+ combat speeds and reactions augmented by precognition (Blocked Force Lightning from Darth Sidious) | Relativistic (Was capable of keeping pace with Darth Sidious in a duel). Massively FTL+ reactions and combat speed (Comparable to Darth Sidious. Casually deflected a barrage of blaster bolts without even looking. "Faster than thought", he dodged a flechette missile that detonated in a nanosecond[1])

Durability: Wall level naturally (Scaling from ARC Troopers). At least Island level with Force amplification (Suffered prolonged exposure to the Force Lightning of Darth Sidious, ultimately being killed only by the fall from the Chancellor's office after being knocked out) | Street level naturally. Solar System level with Force Amplification (Survived an onslaught of Sidious' full power Force Lightning, only being killed by the resulting fall as a result of his lack of stamina. Took a Force Blast from Sidious and managed to immediately get back on his feet)

Stamina: Very high (Able to augment and further enhance his abilities with the Force)

Range: Extended melee range with lightsaber. Tens of meters with Force powers. Interplanetary (Obi-Wan and Ventress were able to sense when Anakin had left the Teth planetary system) to possibly Interstellar with telepathy and Force senses | Extended melee range with his lightsaber. Tens of kilometers with telekinesis (Should be superior to the likes of Saesee Tiin, who could telekinetically hurl B2 super battle droids up to 4 km away). Interstellar to Galactic with telepathy and Force senses.

Intelligence: A keen tactician and strategist, mastered and created his own style of formalized lightsaber combat called Vaapad and completing Form VII (Juyo), mastered all the other forms of lightsaber combat. Regarded as one of the few who can match Yoda and Count Dooku, as well as Sidious. Highly competent and efficient in planning and fighting in general as well as leading entire armies in the name of the Republic