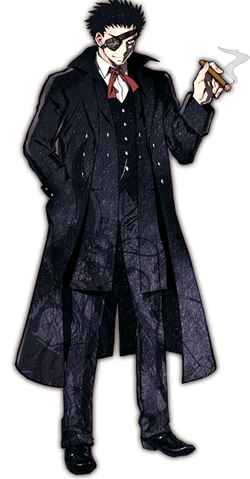 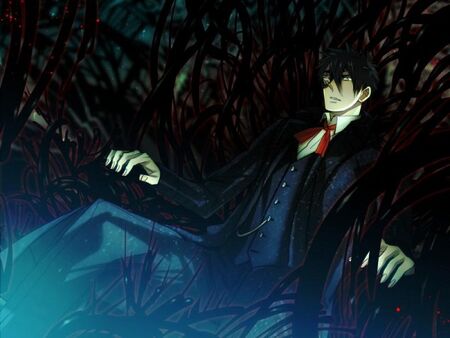 M was a High Agent of the Society, a criminal organization responsible for numerous crimes in Europe. He is also the king of Sharnoth, the Black King who was left behind by the members of his country who sought after the light that is humanity and has spent hundreds of thousands of nights alone in darkness. Due to this, M has forgotten how to feel, and hasn't moved from his throne in thousands of years since.

Eventually, he was visited years after his people left him by a human, James Moriarty, who offered up his whole body so as for him to leave and move around outside of Sharnoth. This very act also caused the Black King to split into two personalities: Baron Münchhausen, one of the "Three Wiseman" of the Society and a clown in black who guides those who reject "tomorrow" to Sharnoth, and The M, a man in black who searches for the one who won't give up tomorrow.

Name: The M, James Moriarty, Baron Münchhausen, Nyarlathotep of the Steampunck World, The Black King, King of Fantasies, King of the Old Ones, King of Sharnoth, Shadow Builder, The God of Gods, The King of the Gods, The Crawling Chaos, The Knight of the Abyss, The Jet Black God

Age: Inapplicable (Time is completely meaningless to him)

Powers and Abilities: Superhuman Physical Characteristics, Sealing (Sealed the Great Engine Clock in another universe), Immortality (Type 1), Non-Corporeal (Has no physical form, is infinite darkness itself), Reality Warping (Can rewrite reality as he sees fit), Soul Manipulation (Manipulated the souls of the dead Meta=Critter hosts to talk to Mary. His tentacles can also reach into souls and harm them), Spatial Manipulation (Can twist space), Enhanced Senses (Can see invisible things), Time Manipulation (Stopped the time of the entire world, can loop time to make the same day occur endlessly), Power Bestowal (Gave Mary and Charlie the Sword of Rejection which can tear through and expand space), Mind Manipulation and Memory Manipulation (Can attack others minds by sending them images of their past), Darkness Manipulation, Acausality (Type 4; M can devour things that are beyond causality, implying that he himself is also beyond causality. He is also the same as Sharnoth, an infinite realm within which time doesn't exist), Non-Physical Interaction (Can harm intangible beings such as invisible shadow men. Can destroy Metacritters, beings of paranormal phenomena born from the wishes and feelings of a human and who cannot be harmed conventionally), Large Size (Type 9), Dimensional Travel (Can travel to other dimensions such as Sharnoth, and Karsheel), Fear Manipulation (Being in his presence causes others to experience fear, causing them to react in different ways such as vomiting or fainting), Shapeshifting, Abstract Existence (Type 1; M is a conceptual existence that is infinite darkness. He can physically exist in reality and in all areas of darkness. The galaxy that contains our planet, the cluster of galaxies that gather it, and the vast darkness that owns it is one of the traits of his character as the black, the darkness, a pillar of the Outer God), Avatar Creation (Has a thousand manifestations on a planetary scale to even a galactic scale), Conceptual Manipulation (Type 3; Sharnoth, an infinite world is the way it is because M feels nothing. The infinite darkness of Sharnoth and M are the same thing), Telepathy, Absorption (Absorbed every human in the entire world into his world of Sharnoth), Possession, Multiple Personalities, Higher-Dimensional Existence, Self-Sustenance (Types 1, 2 and 3), Teleportation (Can seemingly appear out of nowhere and in multiple places at once), Cosmic Awareness, Deconstruction (Can evaporate things merely by gazing at them), Genius Intelligence, Flight (Can fly)

Attack Potency: Multiverse level+ (Can twist and rewrite all worlds, each infinite in size, of which there are as many as there are humans. Devoured an infinite series of stacked and multilayered universes which increases forever, beyond time, space and causality)

Speed: Immeasurable (Exists in a realm without time, distance and time are both meaningless to him, and he is beyond both time and space), Omnipresent in Sharnoth (M is everything within Sharnoth, as it's apart of him)

Intelligence: Genius (M is a natural science scholar who created the Equation, which is a complicated mathematical formula that is too long to read even for Mary who possesses a Golden Eye. Using the Equation, M can wrap himself in it, creating black blades from his shoulder and right arm and a crack in his chest. After his transformation is complete, strange black arms devour his opponent)