MS Paint Adventures is a series of 3 seemingly connected webcomics written by Andrew Hussie. The 4th one, Homestuck, is entirely separated and became its own franchise.

The first story is Jailbreak, a (previously) Interractive Comic game run by Andrew Hussie. It tells the story of a a guy trying to escape his jail cell, however unlike its successors, it doesn't truly has a coherent story and is more fun-based.

The second story is Bard Quest, an experience of multiples branching path story which never get an ending. It tells the journey of a bard, who's, after being brought by a bored and grumpy king, is appointed as the kingdom's head dragon slayer.

The third and longest of these webcomics is Problem Sleuth, revolving around the inane adventures of a trio of detectives trapped inside their offices by ridiculous circumstances. Eventually, their adventures bring them to the imaginary world, where they battle against the imaginary demonic counterpart of a crime boss.

Powers of the verse

Problem Sleuth has several high level reality warpers, including Godhead Pickle Inspector, who is stated by the narration to be the supreme being of all of the comic's narration, and normal Pickle Inspector, who created the universe by duplicating himself across time and space infinitely. It also includes a character who became a supermassive black hole by multiplying his mass by a factor of a Googolplex (10^10^100) that was distorting all of time and space, his equally powerful demonic counterpart who tore the universe in half prior to reaching his full power, and the main character, Problem Sleuth, who fodderized them.

Prisoners
Add a photo to this gallery

Pickle Inspector
Add a photo to this gallery

Madame Murel
Add a photo to this gallery

Monster Pickle Inspector
Add a photo to this gallery

Mobster Kingpin
Add a photo to this gallery 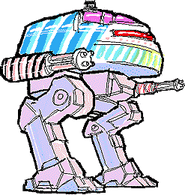 Candy Mecha
Add a photo to this gallery
Retrieved from "https://vsbattles.fandom.com/wiki/MS_Paint_Adventures?oldid=6222935"
Community content is available under CC-BY-SA unless otherwise noted.