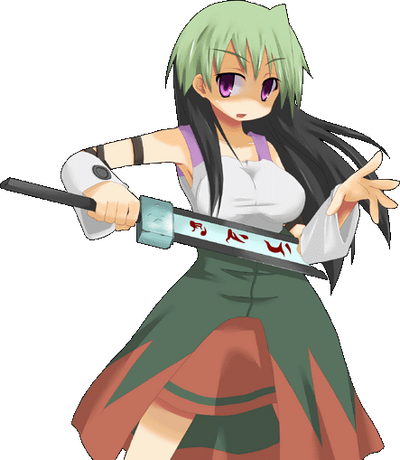 Lynia is a playable character in Wonderful World. She is a hunter for the Special Forces Group "Demon Hunt" of Military Town Berga.

She was born from the city Orhan that guards the gate connected to Makai. At the age of 19 she married a childhood friend and lived happily for a while, but was then attacked by a demon who appeared to activate the Makai gates. The city was soon destroyed and Garruk was murdered. After that, Lynia studied battle to sharpen her soul and joins the Demon Hunt at the age of 21. Her Battle capability is one of the most popular in the demonic hunt, and manipulates the magic of water and ice. However, her battle style, places a heavy burden on her body, as she was before a normal daughter. The influence of using too much magical power has begun to appear in her hair.

Lifting Strength: Unknown. At least Athletic Human (Can lift the currently unplayable Heathrod at 125kg, but it's possible she can do better)

Durability: Small Town level (According to this calc, Chartette's swing alone should be capable of this)

Intelligence: Extremely High (Should have fought every Demon in the overall roster (This includes Areyu "The Demon's Claw", & Heathrod "The Demon's Armor.")

Weaknesses: She can only use 1/3 of Garruk's Power.

Feats: Is a high-ranking Demon Hunter of the Berga "Demon Hunt" Forces, has mastered Water/Ice Magic, According to Sabe's Arcade Mode, She is the final opponent, possibly hinting she was the one who finished him off.

Retrieved from "https://vsbattles.fandom.com/wiki/Lynia_(Wonderful_World)?oldid=4617355"
Community content is available under CC-BY-SA unless otherwise noted.