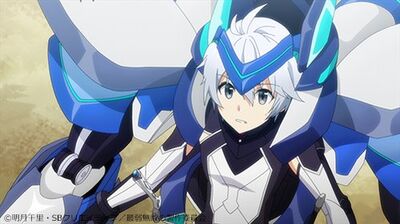 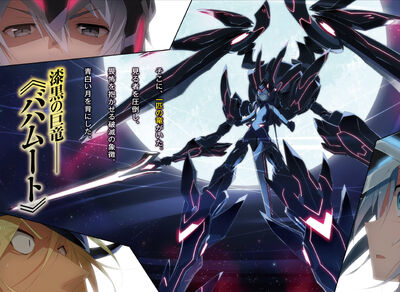 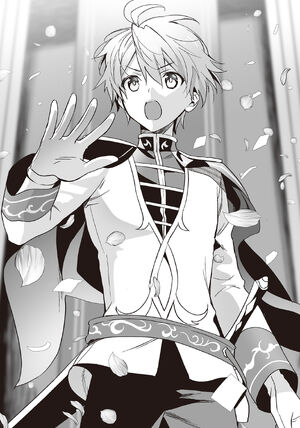 Lux Arcadia is the main protagonist of Saijaku Muhai no Bahamut. He was the seventh prince of the Old Arcadia Empire, with the royal family being ousted by a coup d'état planned by his own half-brother, Fugil Arcadia. As a result, he's reduced to doing menial labor until he accrues enough credit to cover one-fifth of the national debt. Prior to this, he was known as the "Weakest Undefeated", having never lost or won an official Drag-Ride battle due to his tendency to simply dodge until time ran out.

Unbeknownst to the majority of the populace, Lux is also the legendary figure known as the "Black Hero", having annihilated 1200 Drag-Rides in an instant when he was 12. To this end, he wields the strongest Drag-Ride of the Old Empire, the jet-black Bahamut, which lent to his epithet and reputation.

All previous abilities in addition to Superhuman Physical Characteristics, Flight, Forcefield Creation, Can bypass force fields, Energy Manipulation (Can create and nullify energy blasts), Shockwave Generation (All Drag-Rides are able to generate shockwaves with Howling Howl), Attack Reflection and Pressure Points (Critical Hit can reflect enemy attacks while targeting a weak point into their weapons/limbs to break them)

All previous abilities but enhanced in addition to Reload on Fire (Which can compress all kinds of phenomena, including accelerating and decelerating time, as well as increasing a Drag-Ride's power and speed or weakening his opponents), Magnetism Manipulation and Transformation (Over Limit)

Same as before in addition to Pseudo-Time Stop (Can slow down time to the point it appears all space surrounding him stops moving), Pain Inhibition (Can reduce his own pain into less than a tenth with Reload on Fire) and Senjin's Attack Reflection

Stamina: High. As a member of the former Imperial Family, Lux has a high-compatibility with Drag-Rides and can thus operate them for extended periods of time, and even when Bahamut has been constantly described as heavily exhorting during prolonged battles, Lux has been able to go through it and continue fighting even after "reaching his limits" many times, to the point of having shown to be able to use Drag-Rides for 2 hours straight even while being weakened due to the use of Over Limit. In addition to this, Lux has received Baptisms, which can inflict agony beyond imagination, being described by people who survive them as having their blood boiling in addition to pain across their entire body, and stated by Singlen to tamper a lot the nerves in the whole body, and recover from it shortly after without much issue. As of the New Kingdom arc, Lux estimated he was approaching the same level of Baptism Singlen had, meaning he should be roughly comparable to him.

Intelligence: Lux is a genius Drag-Knight who received his license at the tender age of 12, making him the youngest Drag-Knight ever. To this end, he is a skilled swordsman who is able to clash with veteran Drag-Knights without issue and casually defeat 1200 other Drag-Rides while using Bahamut. In addition, he was so skilled that he was able to stalemate countless other Drag-Knights in official competitions with his awkwardly armored and weighted Wyvern, using these tournaments as glorified tutorials for him to get used to the weight distribution of Bahamut. Furthermore, he has developed numerous techniques that minimize the lag between his movements and those of his Drag-Ride's with Fugil's help, further proving his overall superiority on the battlefield.

Weaknesses: Due to its heavy armor, Wyvern should be slower than most flying type Drag-Rides, but this is mitigated by Lux's Drag-Knight skills that allow him to compete even against Divine Drag-Rides. To use Critical Hit, Lux needs to touch his opponent's attacks with his sword. | The first five seconds of Reload on Fire actually make Lux weaker/slower, and the compression strengthening lasts five seconds, although Lux is able to reactive it any number of times. While Reload on Fire can increase both his destructive power and speed, it CANNOT increase both at the same time. Using Recoil Burst requires a great deal of concentration, but Lux doesn't have problems using the technique even under high pressure due to his great skills. He can't use Reload on Fire and his Hidden Techniques if he becomes unable to breath. Using End Action leaves Lux out of air for a few seconds, leaving him open to enemy attacks. Over Limit lasts five minutes, and using it deals a heavy physical backslash to Lux, to the point it can put him into a coma for a week; however, during the Seven Dragon Paladins arc, Over Limit has only been shown to decrease Lux's mobility for a few days after its use.