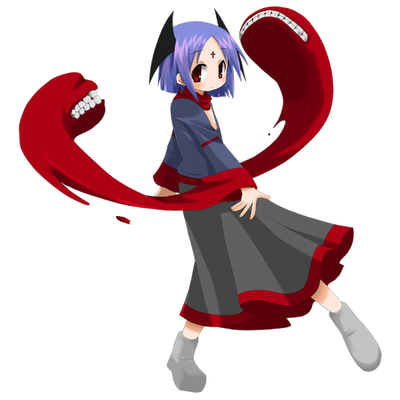 Lunathia is a playable character in Wonderful World.  She is a Demon of Human Type born in the Makai. Due to her age, she was never around during the War between Humans & Demons, thus she has no hostility towards humans. She has a passive personality she is extremely curious, eyes beaming even. She uses an old fishing rod she found and to pass the time in the Makai, she fishes in the Blood Pools of said world, knowing she won't get anything.

It seems that she is throbbing for the first time on the ground as she will go to the ground to recover the pupa of the demon king demoted by Sabe's order Sabe was also the one who taught her all the Swear Words in the book.

Intelligence: Very High (Under the tutelage of Friede.)

Weaknesses: Despite Friede's teachings, Lunathia is still very naive. A total cusser thanks to Sabe.

Feats: All the Blood & flesh created was from Lunathia's red articles of clothing, allowing her to not get pale. She is under the Tutelage of Friede, who is rumored to be the wisest Asmodian in the verse. Finally, she is capable of leaving the Makai, and not exposing her Asmodian status.

(NOTE: All attacks are affected by the Change Range Ability.)

Retrieved from "https://vsbattles.fandom.com/wiki/Lunathia_(Wonderful_World)?oldid=4118413"
Community content is available under CC-BY-SA unless otherwise noted.