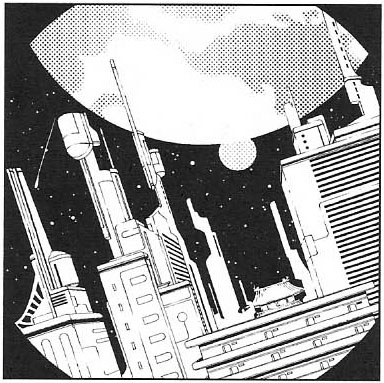 The Lunar Capital (月の都, Tsuki no Miyako) is an extremely powerful and advanced civilization on the Moon of the Touhou Project universe. They used to be humans living on Earth. However, their leader, Lord Tsukuyomi, wanted him and his kind to escape the impurity of Earth. They did so by colonizing the moon, an otherwise untouched and pure land, where they could live a completely pure life.

Civilization Type: Planetary Civilization (Holds dominion over the entire Fantasy Moon, which is hosted in its own separate space-time continuum), possibly higher (Shown to have some degree of control over the Dream World, a world shown to vastly exceed interstellar scope)

Kardashev Level: Likely Type II (Far superior to any Gensokyan society, who uses the power of Utsuho Reiuji as a main source of power)

Age: Unknown (The date of creation of the Capital is unclear, but far predates the year 478, the date when Mizue no Uranoshimako came to the Moon, as the Capital was known in legends since generations prior)

Population: Unknown, at least in the millions (The Capital itself has shown to be the size of large cities from Earth), far into the billions including the Dream World (The Dream World has a copy of every individual that dreams, which includes the billions of humans from Earth, alongside possibly anyone who might have died and ended up in Heaven or Hell in the past)

Territory: Population exists solely on the Fantasy Moon, which is its own Brane World separate from the main universe. The Capital uses the Dream World as a way to Earth

Powers and Abilities: Superhuman Physical Characteristics, Immortality (Type 1), Flight, Danmaku, Homing Attack, Telepathy, Dimensional Travel (Even using extremely dated technology, they could travel from the Lunar Capital to Earth), Mind Manipulation, Intangibility, Sound Manipulation, Light Manipulation, and Energy Manipulation, Regeneration (Low-Godly. Can regenerate solely from their Non-Corporeal "mind"), Resistance to Mind Manipulation (Can resist the effects of the moon, which can drive insane and kill humans) | Probability Manipulation (Exploited the fact that, according to quantum mechanics, if an event has any possibility of happening, it will inevitably happen. Thus, they made seemingly impossible events happens, such as getting to the Moon extremely early in their civilization's history.), Quantum Manipulation, Atomic Destruction (Possess weapons that can atomize entire forests. They also possess bombs that can seemingly destroy on a Planck level), Time Manipulation (Have access to the Ultramarine Orb Elixir), Spatial Manipulation (Separated the Lunar Capital from the main Brane World), Sealing, Death Manipulation, Immortality (Types 1, 3, and 5. Have access to the Hourai Elixir), Regeneration (Low-Godly. Have access to the Hourai Elixir), Creation, Magic (They were the ones to create Magic in the first place), Matter Manipulation, Ice Manipulation (Froze over their entire city), Memory Manipulation (Likely altered all of their population's memories), Reality Warping, Eternity Manipulation (Formerly), Resistance to Probability Manipulation (Lunarians have so much fortune that it cannot be reduced), likely far more (They have been stated both by Word of God and Yukari herself that no one from Gensokyo stands any chances against them, implying that they can counter all of their abilities. They also created all the Youkai from Earth and Gensokyo) | Fire Manipulation, Non-Corporeal, Abstract Existence (Type 1; The true form of a God exists as an idea, and a god can spread and manifest itself in any number of physical bodies, each with equal power), Transmutation, Attack Reflection, Holy Manipulation, Fate Manipulation, Limited Conceptual Manipulation (Type 3; All gods can give "names" to things, giving them a concept of their own, and a defined border. They can also modify their own concept/name) and Resistance to it (Gods precede concepts and thus do not need one to exist)

Power Source: Unknown, possibly solar energy from the Sun (Amaterasu, the Goddess of the Sun, is tightly linked to the Capital)

Industrial Capacity: Capable of keeping up with the needs of their entire civilization and of keeping their unknown sized rabbit army well armed. Vastly superior to modern humanity

Military Prowess: A vast quantity of various weapons and several spider drones, but unknown outside of that, although it should be far superior to modern day Earth

Weaknesses: The Lunar Capital utterly despises what they perceive as an impurity, as prolonged exposure to it would sap at their immortality. As a result, they do not attempt to expand upon impure lands, including Earth and likely other realms such as the Dream World. It also discourages the use of the Hourai Elixir due to its inducing impurity on the drinker.

A Group of Moon Rabbits. Some of many residents of the Lunar Capital. 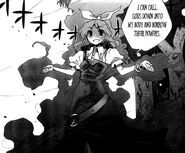 Watatsuki no Yorihime, whom, along with her sister, is in charge of the Lunar Defense Corps.

Watatsuki no Toyohime, the elder sister of Yorihime and the other leader of the Lunar Defense Corps.
Add a photo to this gallery