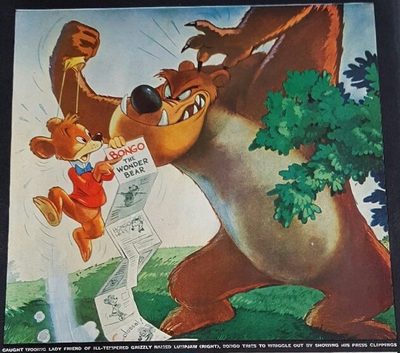 Lumpjaw is the roughest, meanest, biggest and toughest grizzly bear in the forest, who serves as the main antagonist for Bongo, a featurette from the animated musical fantasy package film “Fun & Fancy Free”, as well as the comics based off the short film and other Disney comics where he either makes a cameo or acts as the standard bad guy. He’s mostly depicted as Bongo’s rival and bully, challenging him for a mate, Lulubelle.

Attack Potency: Wall level (Can smash through trees and rocks with little effort)

Lifting Strength: Class 5 to Class 10 (Has swung massive trees and rocks around, toyed around with crocodiles and lifted and sent flying over two dozen other grizzly bears off himself)

Stamina: High (Didn't tire at all during his fight with Bongo)

Standard Equipment: None, though he has a tendency to use nearby trees and rocks as weapons

Intelligence: Below Average in the movie (Though he has some excellent balance, comparable to Bongo who spent all his life in the circus), Gifted in the comics (Uses basic tools and even invents stuff out of random junk lying around, and is also even better balance-wise than his movie counterpart)

Weaknesses: A bit dim in the movie and easy to trick in the comics, otherwise none notable.

Retrieved from "https://vsbattles.fandom.com/wiki/Lumpjaw_(Disney)?oldid=5115465"
Community content is available under CC-BY-SA unless otherwise noted.