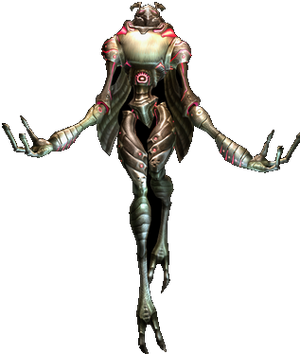 The Luminoth are the inhabitants of Aether, a planet torn apart from years of conflict with Dark Aether. Their main enemy is the Ing (which means "terror" in the Luminoth's language) which had gravely outnumbered and outmatched the Luminoth until Samus had arrived.

Yet, they should not be underestimated, as they are considered as part of the High 3 alien species, alongside the Chozo and Almbics.

Powers And Abilities: Superhuman Physical Characteristics, Longevity (Members of the species have lived for about 2.15 centicycles, or 645 Earth years), Light Manipulation, Darkness Manipulation, Matter, Anti-Matter, and Dark Matter weaponry, Healing, Homing Attack, Weather Manipulation, Portal Creation, Can transform into energy if he's in a giant energy beam, Can see invisible beings, Portal Creation/BFR via Dark Burst, Space-Time distortion with the Sonic Boom, Forcefield Creation (Can create light and dark barriers), Telekinesis, Clairvoyance, Energy Manipulation (Stated to have augmented themselves to be considered equals to the Chozo in this regard). Resistance to the following: Phazon (Albeit for short periods of time, however the Dark and Light Suits enhance their resistance) and Possession (Created technology specifically made to counter Possession by the Ing).

Attack Potency: Planet level (The Luminoth survived the impact on the temple grounds from the Leviathan) | At least Planet level, possibly higher (Made technology like the Screw Attack which is generally on par with the Power Bomb and Plasma Beam, it is possible that the Luminoth had a variation of the Varia Suit that Dark Samus stole. | Unknown (Given only to the Champion of Aether, the Dark Suit is somewhere in between the power of the Light and Varia Suits.) | At least Small Star level (Created the Light Suit from a chunk of the Light of Aether, while it was still missing a part in the Dark Sky Temple)

Durability: Planet level (Survived the collision of a Leviathan) | At least Planet level, possibly higher (Constantly fights with hordes of the Ing, has fought beings that can survive the Screw Attack) | Unknown (Capable of taking hits from Quadraxis, somewhere between the Light and Varia Suits) | At least Small Star level (The Light Suit was capable of fighting off entities like the Emperor Ing or Dark Samus, the full Light of Aether should be above that)

Stamina: Very High (A defender of the Sanctuary Fortress fought the Ing non-stop to the point that the Ing had to call in the stolen mech to keep up with him.)

Intelligence: Genius (Created shielding to protect themselves from possession almost immediately after the first Ing raid, most weapons were quickly designed and nearly perfected despite having had no offense experience prior. Created geothermic technology that replicated the effects of a star for Aether.)

Weaknesses: Those who lack the Dark Suit or Light Suit are not resistant to a corrosive atmosphere.

Beam technology: Capable of allowing them to use different weapons and projectiles to attack, although how the beam technology is used is unknown.

Missiles: A standard seeking missile, it has the effect of doing a quick amount of damage and some knockback.

Charge Combos: A combination of beams and missiles, the charge combos have a large impact on the power of the blasts.

Suits: These upgrades to the Luminoth either are suits or upgrade said suits, but their overall effect can be large on the Luminoth's power.

Visors: Visors help the Luminoth with different applications both in and out of battle.

Screw Attack: A rapid jump that engulfs the user in energy, allowing it to be a great transport and an offensive device.