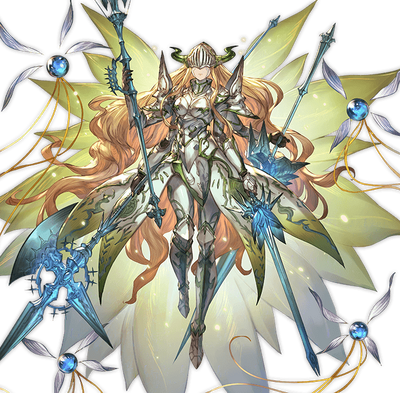 Luminiera is a Primal and Guardian of the Albion Citadel. This glorious knight offers absolute devotion and assured victory. She exists solely for the sake of her master, mercilessly destroying any who would dare stand in their way.

Powers and Abilities: Superhuman Physical Characteristics, Flight, Weapon Mastery, Immortality (1, 2, 3, 4 and 5, 8 in its true form), Non-Corporeal and Abstract Existence in its true form (Type 1; Primals, in their true forms, are abstract without any kind of form, representing their elements or abstractions), Regeneration (Mid-Godly; Primals are capable of regenerating after being reduced to their concept), Resurrection (Primals can resurrect themselves, though this takes extremely long amount of time thus it's not combat applicable), Summoning (Primals can summon monsters), Aura, Light Manipulation, Berserk Mode, Energy Manipulation, Weapon Creation (Can create weapons out of energy), Enhanced Senses, Animal Manipulation, Cloth Manipulation, Telekinesis (Capable of manipulating attacks and damage to target her instead of allies), Mind Manipulation (Can make a person go wild or insane), Body Puppetry (Capable of locking person's body on certain places), Dream Manipulation (Luminiera was able to manipulate Vira's dreams), Possession (Capable of taking over a person's consciousness, slowly degenerating original owner's mind in the process, working on even objects), Power Bestowal, Memory Manipulation (Capable of sending others her own memories), Shapeshifting, Fusionism (Can fuse with others, body and soul), Curse Manipulation and Corrosion Inducement (Capable of cursing and putrefying her opponent with Primal Beam), Power Modification, Paralysis Inducement (Capable of inducing paralysis with Blade of Light), Death Manipulation (Can induce instant death with Blade of Light), Homing Attack (Can home in on the opponent with Unknighted), Teleportation, Life Manipulation, Damage Reduction, Power Nullification, Healing, Statistics Amplification, Damage Boost, Status Effect Inducement, Statistics Reduction, Healing Negation, Resistance to Statistics Reduction, Sleep Manipulation, Perception Manipulation, Status Effect Inducement, Empathic Manipulation, Power Nullification, Gravity Manipulation, Paralysis Inducement, Poison Manipulation (Has debuff resistance, which includes all of these effects), Power Modification, Transmutation (Immune to Zombified status which turns people to zombies and any heals will turn to damage instead) and Death Manipulation (Immune to lethal hits which instantly kill)

Range: Tens of kilometers. An average Primal can reach an entire island easily.

Standard Equipment: An unnamed swords and anything she possesses.

Intelligence: Unknown. Seems to have developed sense of self, emotions and thought on her own but seems to not know much about the world.

Weaknesses: Weak to Dark based attacks. She can't use her special attacks when Overdrive is broken. Her being abstract is only applicable when her power is drained completely, and this is downside more than anything else, as Primals in their abstract forms are completely powerless.

Retrieved from "https://vsbattles.fandom.com/wiki/Luminiera?oldid=5387758"
Community content is available under CC-BY-SA unless otherwise noted.