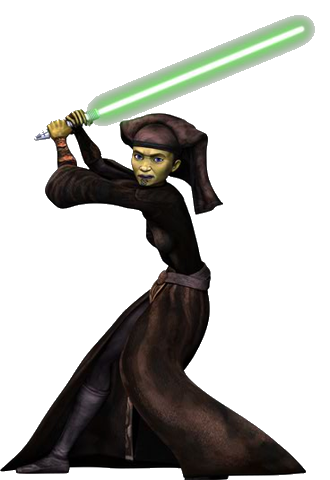 Luminara Unduli was a Mirialan Jedi Master during the waning years of the Galactic Republic. Like all Mirialan Jedi Masters, she would train a Padawan from her homeworld of Mirial named Barriss Offee and not only teach her in the ways of the Jedi but also Mirialan culture. Both of them would be made to enter military service at the outbreak of the Clone Wars with Unduli as a General and Offee as a Commander.

Like other Mirialans, Unduli was gifted with agility & flexibility above those of the typical humans. This trait combined with Force based physical augmentation made her a swift & agile combatant even by Jedi standards. Trained as a Jedi Guardian, she was a skilled lightsaber duelist. Her primary discipline was Form III: Soresu. She was regarded as a master of the form with a nearly impenetrable defense which only the best duelists could get around. Only Obi-Wan Kenobi was a superior practitioner of the form. She also had a high level of skill in in Form V Shien as well as some skill in Form II Makashi and Form IV Ataru (as evidenced by her acrobatics and tendency to incorporate physical blows into her lightsaber sequences; such as striking people with her lightsaber's pommel).

Despite being trained as a Jedi Guardian, she had traits and skills normally associated with Jedi Consulars. She was a noted diplomat and was skilled in the art of Force Healing (she would pass the latter skill to her Padawan as well).

Unduli's fate is quite different in the old Legends continuity and the new Disney canon after the passing of the infamous Order 66. In Legends, she was gunned down by Clone Troopers while using Force Healing to take care of the wounded on Kashyyyk. In the Disney canon, she was captured alive on Kashyyyk and executed sometime later on Stygeon Prime. These events were kept secret and the Galactic Empire's agents circulated rumors that she was still alive on the planet as bait. This lured many Jedi, hoping to rescue her and recruit her to the cause of the Rebellion, to their deaths at the hands of the Grand Inquisitor.

Attack Potency: Large Town level (Matched a Force push from Asajj Ventress with her own. As a fully fledged Jedi Master and one of the most powerful and renowned of her time as noted by Kanan Jarrus, she should be vastly superior to the likes of Padawan Ahsoka Tano as well as Kanan himself and just below Jedi High Council members such as Obi-Wan Kenobi, whom she is a peer of); can cut those with durability similar to that of General Grievous with lightsabers | Planet level (One of the most renowned and powerful Jedi masters of her time. Is a peer of the likes of Quinlan Vos and Obi-Wan Kenobi)

Speed: Subsonic running speeds with Force Speed, Massively Hypersonic+ combat speeds and reactions augmented by precognition (Was able to keep up with Asajj Ventress in a lightsaber duel despite impaired eyesight, comparable to other powerful Jedi Masters like Obi-Wan Kenobi) | Relativistic with FTL reactions and combat speed via power-scaling

Stamina: High (Was able to continue fighting despite impaired eyesight and being pinned under tonnes of steel) | Very high (Has continued fighting for long periods despite being battered; held up a collapsed cave roof for hours with telekinesis before being rescued)

Range: Extended human melee range with lightsabers and dozens of meters with telekinesis | Interstellar with telepathy and Force senses

Intelligence: Quite high. Is a skilled fighter and also a good teacher who imparted skills to her Padawan Barriss Offee. Was also a noted general during the Clone Wars where she proved herself an expert strategist & tactician and was held in high regard by her peers. She is also pragmatic enough to utilize Dun Moch, or psychological warfare in the form of taunts, jeers, and insults against her foes to unnerve them and expose their flaws, causing them to make mistakes.

Weaknesses: Outside of combat and as a planner, she is humble and wise, but in combat, she has shown herself prone to overconfidence when she has the upper hand, leading to critical tactical errors on at least two occasions which turned the tide of the fight in her enemy's favor, Extensive Lightsaber combat could theoretically leave her exhausted and unable to properly utilize the force, greatly weakening her, but this is unlikely due to her vast reserves as a Jedi Master.