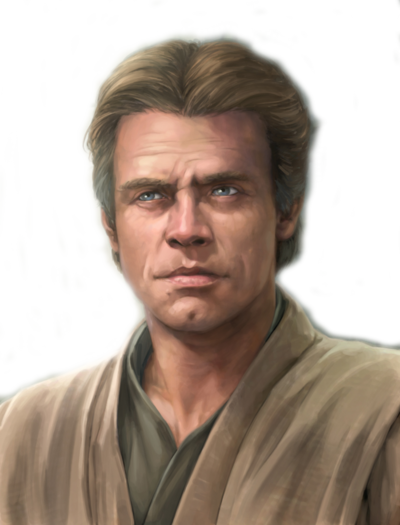 Luke Skywalker is the main protagonist of the Star Wars original trilogy. The son of famous Jedi Knight Anakin Skywalker, he was left on Tatooine with his aunt and uncle after the fall of the Jedi Order. 19 years later, he encountered former Jedi Master Obi-Wan Kenobi (Under the alias "Ben Kenobi") and joined the Rebel Alliance to bring down the Galactic Empire. After the fall of the empire, he would go on to establish the New Jedi Order and eventually serve as its Grand Master.

Powers and Abilities: Superhuman Physical Characteristics, Enhanced Senses and Perception, Aura-Sensing, Various lightsaber combat skills, Skilled Swordsman, Expert Marksman, Skilled Unarmed Combatant, Clairvoyance, Precognition, Telekinesis, Telepathy, Spatial Manipulation and Teleportation via Fold Space, Mind and Memory Manipulation, Illusion Creation (Capable of projecting illusions on a planetary scale as well as dispelling them) and Astral Projection (Cross-dimensional), Psychometry, Barrier Creation via Force Barrier, Energy Manipulation (Can reflect, redirect, and absorb energy attacks thrown at him and fire off blasts of Force energy), Elemental Manipulation and Durability Negation via Electric Judgement, Fire and Energy Blasts via Force Blast (Blasts of golden flame), Regeneration (Mid-Low in short periods of time from even fatal attacks; in the form of Force Healing), Technology Manipulation via Ionize and Mechu-Deru, Astral and Soul Manipulation, able to put others to sleep via Hypnosis, amazing capacity to learn new techniques within days such as Fold-Space as mentioned, Non-Corporeal (Spirit form only), can also project his Force Spirit/essence into an alternate dimension that causes psychic entropy on the mind and body without any sign of fatigue by the end of his mastery of this technique, despite another being sealing it off as its creator and having greater control of it to prevent said intrusions, can block/hide his psychic presence from others attempting to send or locate him actively or passively, Resistance to Poison, Matter Manipulation on a subatomic scale (Creating a Holocron requires one to make numerous precision alterations to it on a subatomic scale), Light Manipulation via Force Light, Battle Meditation, Flow-walking, Force Harmony, Force Stealth, Force Stun, Hassat-durr, Mind Walking, Mnemotherapy

Attack Potency: At least Planet level (Managed to somewhat match Darth Vader and repel his attacks with Force Barrier) | At least Planet level, likely higher (Dueled Darth Vader on equal footing and finally defeated him) | Solar System level (Stated to have a destructive power that "humbles even the Death Star". Capable of brightening the light of stars across the galaxy with the light of his Force, regardless of their type and nature. Repeatedly stated to have more potential than Darth Sidious, ultimately surpassing him. Easily defeated Brakiss twice, who could manipulate the energy of stars) | At least Multi-Solar System level, likely higher (Capable of harming Abeloth with his Force blasts)

Stamina: Very high (Can also be amplified by the Force and have his endurance augmented for days on end even without nourishment or rest)

Range: Extended melee range with lightsaber. Planetary with illusions (Taught his students to cloak the entirety of Yavin IV during the Vong War). Galactic with telepathy as well as trans-universal. Telekinetic range is thousands of kilometers if not simply as far as Luke can sense and perceive through the Force.

Intelligence: Very intelligent and wise having seen a lot through the years: he is a master of several various lightsaber combat forms despite no formal training or instruction as well as unarmed combat, a very talented starfighter pilot, and squadron commander; having years of experience as the original Rogue Leader, built the Jade Shadow and is therefore a very skilled engineer and technician as well as having decades of experience with various Force powers and abilities from studying and learning from other factions outside of the Jedi and Sith orders; also a very competent military leader in general given his experiences during the war with the Empire and Yuuzhan Vong. Also very capable and skilled at learning new techniques or powers in a short time: Jacen Solo learned to teleport objects (Fold-Space) in three days, Luke learned the same skill from the same teacher in two days.

Weaknesses: Some of his more powerful techniques might end up draining Luke of his stamina or health with repeated uses

Key: Empire Strikes Back | Return of the Jedi | Dark Empire | Fate of the Jedi

Note: This page only covers Luke Skywalker as seen in the Legends continuity. Some respect threads.

Rumplestiltskin (Once Upon a Time) Rumplestiltskin's Profile (5-B Rumple and Return of the Jedi Luke were used. Speed was equalized)