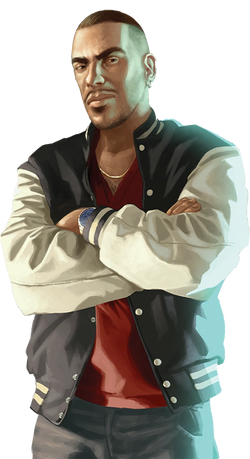 Tier: 9-B physically, higher with melee weapons and with firearms. 9-A with explosive weapons.

Age: 25, according to his LCPD database

Powers and Abilities: Superhuman Physical Characteristics, Expert Martial Artist, Weapon Mastery, Vehicular Mastery (Is a skilled helicopter pilot and can work around with a great number of cars, boats and even an APC), Stealth Mastery, Explosion Manipulation (Via explosive weapons), Fire Manipulation (Via molotovs)

Attack Potency: Wall level physically (He can trade blows with and easily defeat those who can harm him. Equal to the other HD protagonists and can replicate the same feats as them. Can send people flying with his attacks. Can shatter bulletproof glass to pieces with his bare hands. Can dent the APC tank by repeatedly punching it), higher with melee weapons (Can easily deform car bodies and helicopters without issue) and with firearms (Can easily destroy most vehicles and helicopters with ease), Small Building level with explosive weapons (Can one-shot multiple Annihilators with a single rocket launcher shot or grenade. Can one-shot multiple cars at once and reduce them to charred metal. One of Bulgarin's grenades, the same type used by Luis Lopez and the rest of the protagonists, tore a plane apart)

Speed: Peak Human with Subsonic+ combat speed and reactions (Can consistently react to oncoming RPG-7 missiles, which can hit Mach 0.9). Subsonic with most vehicles and helicopters. Subsonic+ to Supersonic+ attacking speed with most firearms

Durability: Wall level (Shares the same durability feats as Niko. Regularly survives high dives into water and tanks high-speed car crashes. Regularly survives gunfights involving high-caliber bullets and can tank being shot with the Explosive Shotgun. Can survive one rocket launcher from a short distance shot before dying. Can also take hits from other people using the same melee weapons against him, which can easily deform cars, helicopters and armored trucks. Was completely fine after a grenade exploded and tore apart the plane he was in), higher with Body Armor

Stamina: Incredibly high (While he can tire out from excessive running, he can still keep up in long gun battles while heavily wounded).

Standard Equipment: Guns and other melee weapons (Although he is limited to one of each type)

Intelligence: Above Average (Despite what people depict him as, he is pretty smart, even outside of combat knowledge. He is much more careful and reasonable in contrast to Gay Tony)