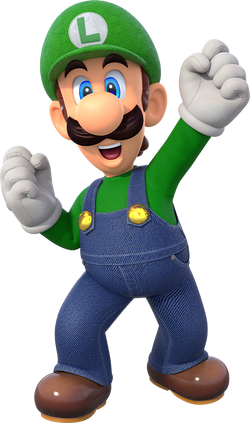 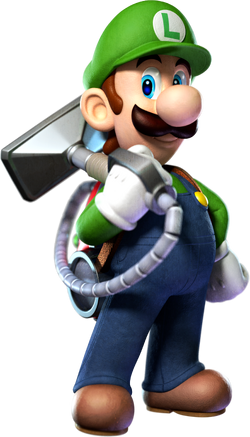 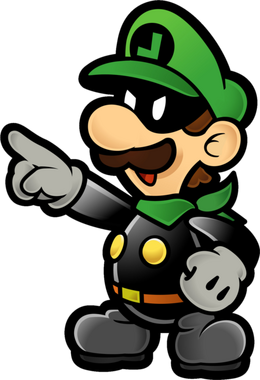 Luigi is Mario's younger, taller, thinner twin brother. He is a major protagonist of the Mario series. Luigi has helped and fought alongside his brother on many occasions.

Throughout his life, he has lived in Mario's shadow, developing both cowardly and heroic tendencies. Mario Bros. marks his first appearance in the Mario series and his debut in general. Originally a palette swap of Mario, Luigi was created to facilitate a second player option. Since the two-player mode was dropped from most main Super Mario games beginning with Super Mario Land, Luigi has gained his own identity and personality.

This is especially noticeable in installments for the Luigi's Mansion series of games, as well as the Mario & Luigi series.

Attack Potency: Multi-Solar System level (Comparable to Mario as he fought most of the opponents he faced and is capable of defeating Bowser and King Boo) | Varies from Multi-Solar System level to Galaxy level (Fought and defeated Bowser, who was also amped by Power Stars) | Likely Multiverse level (As one of the four heroes of light, he, theoretically, should be able to use the Pure Hearts. They are powerful enough to defeat Super Dimentio)

Speed: Massively FTL+ (Capable of reacting while being flung by a Launch Star. Capable of dodging attacks from a Grand Star-powered Bowser, who can tag Starship Mario with his meteors and flew the center of the universe in a short time. Capable of reacting to Bowser and Bowser Jr riding the Koopa Clown Car, which it flew to the sun and the home planet to a nearby galaxy in a short period of time. Kept up with the fake Millennium Star, who flew from the center of the universe to their planet)

Stamina: Very high (Can perform various activities and travel to multiple regions with no signs of exhaustion. Also completed 100 trials of both Flipside and Flopside while defeating Shadoo and Wracktail in a sitting.). Limitless with Pure Hearts

Range: Depends on the power-up. Standard melee range to Tens of meters with powerups. Multiversal with Pure Hearts

Intelligence: Gifted (Despite his timid nature, he is a combatant expert and an experienced plumber. He's capable of driving vehicles and fighting an entire alien invasion as an infant and incredibly skilled in paranormal investigation and engineering. He recently became a doctor as well)

Weaknesses: Varies but usually cowardly and clumsy. Has a phobia of ghosts

Jump: Luigi jumps on his opponent and crushes him/her with sheer strength. Although Mario's more famous for his jumps, Luigi can jump higher than him:

Bubble: Luigi will encase himself in a bubble. Being within the protective bubble will make him impervious to hazards and the attack of his foes.

Guard Shell DX: A special equipment that nullifies any first set of attacks direct at Luigi whenever he engages in battle.

Green Missile: After charging up, he horizontally launches himself while exploding his target on contact.

Fireballs: Luigi shoots green fireballs that can defy gravity. He can launch up to five at once in Mario Kart: Double Dash.

Thunderhand: Taught by the Thunder God. Luigi's gathers lightning in his hand and discharges it at his target for critical damage. This ability can also lower defense and attack power.

Thunder Luigi: Luigi's Mega Strike. He jumps into the air and becoming electrified while glowing green. He then unleashed plasma electric energy at the target which has a re-entry effect.

Luigi Cyclone: Luigi starts spinning in a horizontal fashion, knocking any near opponent away.

Tornado Swing/Ball: Luigi creates and launches a tornado by spinning around and then either throwing an object or striking his target.

Vicious Vortex: Luigi's Super Strike. He strikes a karate pose with a green vortex surrounding him before kicking the target.

Dropchopper: Luigi summons a propeller and clings on to it to hover over his opponent. He then jumps down and drills down on his opponent, creating a shockwave from the impact that damages nearby foes. This attack deals much more damage when Mario attacks along with him.

Star Rocket: Luigi summons a star and rides on it while it flies towards his target, gathering smaller stars in the process. He then crashes down on the target with smaller stars he accumulated striking the enemy.

Negative Zone: Luigi creates a zone with varying negative effects to his opponents such as slowing down, continuous damage, or falling asleep.

Battle Cards: Luigi can utilize cards with special effects to give himself an advantage in battle. Effects can range from increasing his attack, defense, and speed, doing the exact opposite to his opponent, recovering health, nullifying damage, or stopping time.

Magic Weapon: Luigi creates a weapon of pure energy that takes the shape of a hockey stick. This was seen in the battle against the Behemoth in Mario Sports Mix.

Zone Speed: Luigi slows down the flow of time by using his conserved energy.

Key: Base | When powered up by a Power Star | Pure Hearts

The Snatcher (A Hat in Time) The Snatcher's Profile (Speed was equalized, Base Luigi and Ultra Snatcher were used, and both were bloodlusted)

Danny Phantom (Danny Phantom) Danny's Profile (Danny with the Ecto-Skeleton and Base Luigi were used, both had all equipment aside from the Reality Gauntlet, and speed was equalized)

Tails (Sonic the Hedgehog) Tails' Profile (Super Tails and Base Luigi were used, both had all equipment and two weeks of preparation, and speed was equalized)

Meta Knight (Kirby) Meta Knight's Profile (Pre-Star Allies Meta Knight was used, both had all equipment, and speed was equalized)