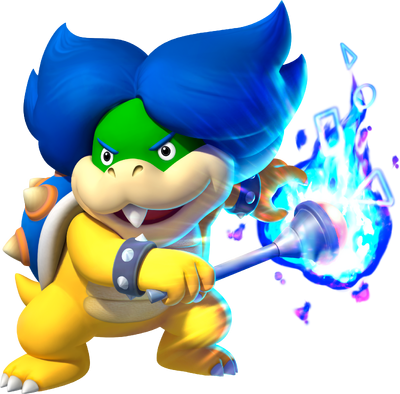 Ludwig von Koopa is the oldest member, as well as, leader of the Koopalings, a tribe that debuted in Super Mario Bros. 3 as Bowser's elite generals in dominating every major kingdom across the world and fighting against Mario. He has appeared in multiple games in the franchise since then, usually as one of the major members of the Koopa Troop that Mario must combat in order eradicate Bowser's schemes. He is the most mature out of all the Koopalings and enjoys listening to classical symphonies. Due to serving as the head of the clan, he's usually portrayed as the most powerful and skilled member with numerous talents and high intelligence, which he is clearly aware of and often shows off because of it. Like most of the Koopalings, he is named after a famous musician. His name, design, and affinity for classical music is obviously inspired by the German composer, Ludwig van Beethoven.

Age: Unknown, likely around his teens

Intelligence: Genius (He was able to build and skillfully pilot vehicles. Noted to be very intelligent and often fights with ingenious methods and tactics. He was also easily able to grasp the plan of the Best Fitness Friends, the information on all the members, and deceived them with his disguise. He also proven to be very manipulative as his negotiation skills is able to sway enemies to join on his side of the army. He also has a doctorate.)

Weaknesses: He's quite overconfident and loves to show off.

Retrieved from "https://vsbattles.fandom.com/wiki/Ludwig_von_Koopa?oldid=6172936"
Community content is available under CC-BY-SA unless otherwise noted.