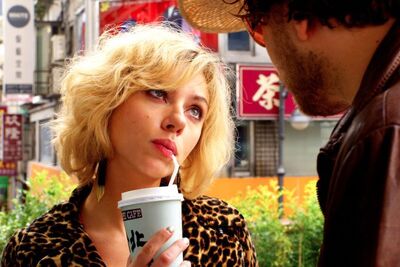 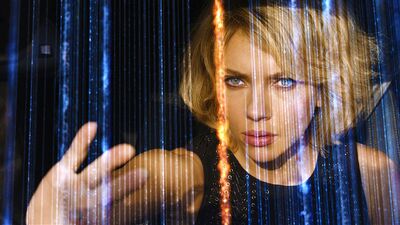 Lucy was a regular woman who became an unwitting drug-mule for a Taiwanese mob. After she has the drug CPH4 (6-carboxytetrahydropterin synthase) sown into her abdomen and it bursts, the toxin is absorbed into her system slowly. It gives her increasing control over her brain functions, and this in turn gives her superpowers and vastly increased intellect and knowledge.

Cosmic Awareness, Non-Corporeal, Intangibility and Universal Merging (Was implied to have fused with the fabric of space-time and become one with the universe), Large Size (Type 8), Self-Sustenance (Types 1, 2 and 3), Higher-Dimensional Existence, all the powers from before, but vastly superior

Attack Potency: Human level | Wall level (Can easily throw people through walls and lift a dozen men at once via telekinesis), can ignore conventional durability in many ways | Unknown (Spread her black nanite substances all over the lab and transformed the objects into a supercomputer, mentally travelled through space and time freely and controlled them), can ignore conventional durability in many ways | Universe level+ (After disappearing and becoming non-corporeal she claims to be "everywhere", and is known to already have control over space and time, understand them entirely, have travelled through the Big Bang itself, and sees time itself as the only proof of existence)

Speed: Average Human | Peak Human movement, Subsonic on vehicle, Supersonic attack speed with firearms | Immeasurable (Can mentally travel through space and time freely and control them) | Omnipresent (Is stated to be "everywhere" and implied to be one with space and time)

Intelligence: Average | Supergenius (Knows what people will think and do before they do it often. Can read, recite and understand all the research of a leading Professor on the human brain in seconds. Understands all quantum mechanics, mathematics, the structure of the Universe all the way back to the big bang itself and can see, manipulate and understand its fundamental forces even before 100% control of the brain) | Likely Nigh-Omniscient (Has transcended her previous intellect and understanding and is implied to be one with the Universe)

Weaknesses: Normal human weaknesses | Struggles to control her powers at first, alcohol at 40% | Unknown | None notable

When Lucy absorbs the drug CPH4 (6-carboxytetrahydropterin synthase), she gains different abilities depending on the percentage of the brain she can control. She can change her hair and eye color at will, she gains telekinesis, superior fighting abilities, she can hack into computers and is able to understand many different languages. Lucy can also see into one's past if she places her hand over one of that someone's shoulders.

Sayori (Doki Doki Literature Club!) Sayori's Profile (Both were 10-B)

Retrieved from "https://vsbattles.fandom.com/wiki/Lucy_(2014_Film_Lucy)?oldid=6951079"
Community content is available under CC-BY-SA unless otherwise noted.