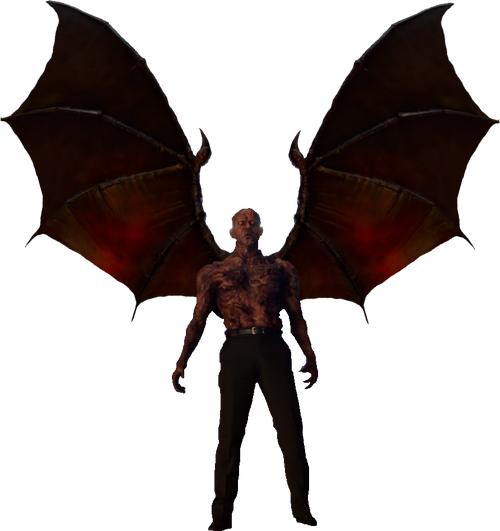 Lucifer Morningstar (formerly known as Samael, the Lightbringer) is one of the older angels and formerly the infamous ruler of Hell. He is commonly known as the Devil or Satan by humans. Lucifer voluntarily left this position to become a nightclub owner in Los Angeles, operating an establishment called Lux. His closest friend and ally is the demon Maze. Lucifer started working alongside LAPD homicide detective Chloe Decker when he witnessed the murder of a close acquaintance of his. This position gives him an easy outlet to punish sinners.

Tier: At least 9-B, possibly at least 7-B, likely higher, 2-A with the Flaming Sword

Powers and abilities: Superhuman Strength, Superhuman Durability, Immortality (Type 1 and 3), Telekinesis, Mind Manipulation (Can compel others to tell the truth), Fear Manipulation (With his Devil Face), Regeneration (Likely Mid-Low), Healing (Lucifer's feathers have healing powers and can even heal injuries caused by demonic weapons), Flight (With his wings), Dimensional Travel (With his wings), Soul Manipulation (Can bring back souls from Hell and place them into recently deceased bodies, as he did with Abel), Shapeshifting, Limited Air Manipulation (With his wings), Technology Manipulation, Omnilinguism (Claims to have the ability to speak all human languages), Creation (Created a card that allowed Constantine, Diggle and Mia to go to the afterlife) and Portal Creation, Master Hand-to-Hand Combatant. Expert Pianist, Expert Escapist, Existence Erasure, Cosmic Awareness, Healing, Space-Time Manipulation and Portal Creation with the Flaming Sword, Resistance to Time Manipulation (Lucifer is able to remain active in slowed down time when he converses with Amenadiel during the latter's visits to Earth), Mind Manipulation (Due to Lucifer being less "malleable", he is unaffected by Azrael's blade which amplifies anger and desire to kill in those who hold it), Poison Manipulation (Unaffected by poison gas) and possibly to Antimatter Manipulation (Wasn't concerned about his Earth being destroyed by antimatter during the Crisis on Infinite Earths), His enhanced metabolism greatly reduces the effects of alcohol and drugs

Attack Potency: At least Wall level (Able to punch through walls and knock people through glass windows with ease. Effortlessly defeated Cain and was able to contend with Amenadiel when the latter had his full power while he didn't), possibly at least City level, likely higher (As the King of Hell, he should theoretically be stronger than demons such as Mallus, who is stated to be demon of the highest order by Constantine), Multiverse level+ with the Flaming Sword (The Flaming Sword has the power to cut through anything and can kill Charlotte and God)

Lifting Strength: Class 1 (Could pick up a 200 lbs+ man of the ground with one arm without any effort)

Striking Strength: At least Wall Class, possibly at least City Class, likely higher (Easily knocked a guy multiple meters away and through a glass window. Punched right through a wall with ease. Should theoretically be stronger than powerful demons like Mallus as the King of Hell)

Weaknesses: Other angels can harm him, Gods, Azrael's Blade and the Flaming Sword, Chloe Decker is not affected by his powers and can hurt him or even kill him due to the circumstances of her birth, demonic weapons forged in Hell can kill him, self judgment.