VS Battles Wiki
Register
Don't have an account?
Sign In
Advertisement
in: Unknown Tier, Tier 1, Tier 1-A,
and 48 more 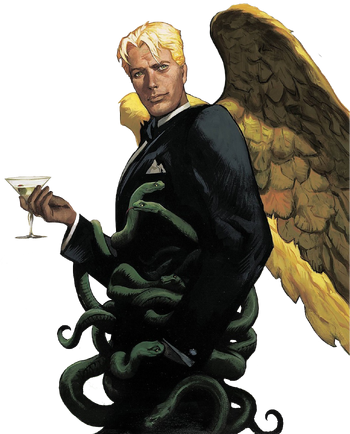 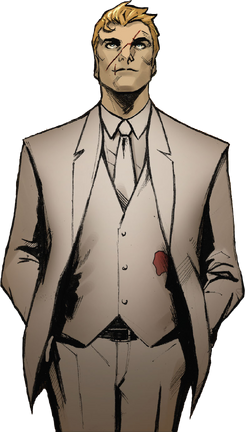 Lucifer Morningstar is a fallen rebel archangel who was cast out of Heaven and onto Earth as punishment for leading the revolt of the angels. He's the twin brother of Michael Demiurgos and the uncle of Elaine Belloc.

Before the DC Verse was created, in the void outside all creations that is the Primal Monitor, Yahweh created two brothers infused with literally unlimited might, Michael Demiurgos and Samael, later called Lucifer Morningstar. After both were formed, Yahweh guided them, instructed them as to how to use their powers, and then they formed the creation we all know as the DC Multiverse.

Eons ago, Lucifer Morningstar rebelled against the Kingdom of Heaven and was cast into a shapeless void known as the Chaoplasm. The Chaoplasm was transformed into a desolate and barren expanse known by many as Hell, the final destination for damned souls. Here Morningstar ruled, awaiting the day he could be freed.

His goal is to have "true free will": break from the influence of his father and creator, Yahweh.

Powers and Abilities: Superhuman Physical Characteristics, Illusion Manipulation (Created an illusion to show Adam events that were occurring in Yahweh's original cosmos[2]) Abstract Existence (Type 1), Incorporeality, Enhanced Senses (Saw the human souls in Izanami's home[3]), Intangibility, Immortality (Types 1, 2, 3 and 4; Manages to survive even while his heart was outside of his body[4]), Transduality (Type 1; Michael describes Yahweh's "plan" as containing life and death, a duality.[5] while The void outside of creation is described as being outside of this "plan"[1]and Lucifer specifically also being shown to escape his function in said plan[1], Conceptual Manipulation (Type 1), Power Bestowal(Made Elaine and Mona guardian spirits of his cosmos, making them godlike existences which are defined as "tutelary" spirits[6]), Creation (With the energy supplemented by the demiurgic energy of Michael, created his own version of Yahweh's cosmos[7]), Existence Erasure (Threatened to erase cosmic entities from existence), Reality Warping, Space Manipulation (Physically bent "the gate" ripping it into millions of pieces which is composed of space and time[8]), Time Manipulation (When creating his cosmos Lucifer noted that he was interacting with time by hurtling it forward into the expanse of his universe[2]), Chaos Manipulation (Wielded and shaped the primordial energy from which all was created), Matter Manipulation, Mind Manipulation (Entered the mind of Elaine's teacher while he was being killed by Elaine [9]), Soul Manipulation (As a punishment, embedded a soul into one of the demons in hell [10]), Dream Manipulation (sent a dream to Rachel[11]) Biological Manipulation (Caused Elaine's dad's heartbeat to rise so high that he got a heart attack[2]), Void Manipulation, Life Manipulation (Created human life in his cosmos, and described himself as "the giver of life"[2]), Death Manipulation (Killed the Adam of his cosmos with a single tap[2]), Acausality (Type 5; Yahweh's plan is stated to have been an all-encompassing "scheme" which contains all of creation[12], with Destiny of the Endless having described events such as Michael's arrival at his home as all a part of this "scheme"[13] and Destiny having been the source of cause and effect in Yahweh's cosmos[14]. Lucifer specifically is described as having escaped his function from the scheme and as such the causality of it [1] ), Limited Causality Manipulation (The titans ascended to godhood and became immune to all forms of power other than their own, to defeat them Lucifer killed the titans before they had ascended to godhood, thus destroying the event of them ever becoming God[15]), Sealing, Sound Manipulation (Called in sounds from the past into the future to instill nostalgia on the target[16]), Energy Manipulation, Flight (Possesses wings that allow him to fly, even in locations such as the void outside of creation[17]), Shapeshifting, Size Manipulation (Implied that he was going to alter the size of Michael to make him more "portable"[18] In the next panel Michael was shown in Lucifer's arms at a much smaller size[18] ), Teleportation, Petrification (Manages to freeze a monster by merely raising his hand[19]), Telepathy(Connected to the mind-space of a character, a realm connected to, but also external, to the dreamworld to hold a conversation with them[16]), Light Manipulation (Controls the light that exists in the beginning of his cosmos[7]), Fire Manipulation(Has demonstrated manipulating fire[18] ), Electricity Manipulation (Causes lightning to appear in Yahweh's cosmos without any clouds[20]), Magic, Memory Manipulation (Implied that he could alter the memories of Elaine Belloc[21], and further implied this by stating that memories are easily malleable for him[21]), Nigh-Omniscience, Blood Manipulation (Added his own blood to the feathers of a bird, which he can use to locate things[22]), Precognition, Fear Manipulation (Encountering him and "getting in his way" caused a woman to start throwing up[23] and it's stated that even a half an hour after the event she had not recovered from the encounter[23], moreover the "touch of his gaze" caused a characters back to start burning and their legs to start shaking[24]), Power Nullification, Law Manipulation (Can manipulate natural laws[25] and Created a cosmos that contains laws specific to the beliefs of Lucifer[26]), Beyond-Dimensional Existence (Type 2), Resurrection (Stated that resurrecting things he's previously killed is also merely a part of his will, then proceeded to resurrect a monster he previously killed[15]), Large Size (Type 11), Dimensional Travel (Travelled to a pocket dimension that had been completely cut off from the rest of the DC cosmology[18]), Information analysis (Analyzes a hurt child to determine what it was that had harmed him [22]), Air Manipulation (Blows on a dustlike substance so hard that it is compared to a supernova[27]), Deconstruction (Turns an immortal woman to dust with a single tap[28]) Telekinesis (lifts a bunch of swords with telekinetic prowess[25]) Breath attack (releases fire from his mouth[29])

Attack Potency: Unknown | Outerverse level (Time and Space are extensions of the mind and will, which he embodies as he's divine will that shapes creation. Is more powerful than Dream of the Endless. Capable of moving in, and comprehending the nature of the boundless void which is beyond all definitions of space and time. Escaped his function and went outside of the Presence's plan. Destroyed Logos with a touch. Logos is the first word which sung all of existence into being)

Speed: Unknown with Massively FTL+ processing speed (Faster than other high-level angelic entities, who can fly across the multiverse in minutes or even seconds. Described as having reactions "As near as possible to being instantaneous." Processed the universe's 20,000,000,000 year history in the blink of an eye which would make him 3.70666666e201c, or over 3.7 sexsexagintillion times faster than light) | Irrelevant

Standard Equipment: The Sword of Azazel

Intelligence: Extraordinary Genius. Lucifer's intellect makes him a formidable adversary, allowing him to be 10 steps ahead of others. While powerless in The House of Windowless Rooms he was able to manipulate the many gods in the realm who attacked him and drive them to their own deaths, his prescient knowledge is to the extent that he even knows how minor events in the present will effect the future. | Nigh-Omniscient

Weaknesses: Lucifer is prideful and narcissistic; he always keeps his word and will never lie as he considers it to be degrading and below him. As experience is everything to him, Lucifer will not turn back time to correct every mistake and he sometimes likes to see how everything plays out (for example, he surrendered to Etrigan the demon because of this rather than destroy all opposition). Without his feathers, he is greatly weakened and he cannot create matter out of nothing, as he needs the Demiurgic force of his brother Michael, and later his niece Elaine.

Restores Michael with a wave of his hand.

He describes his creation as a totality, a multiverse.