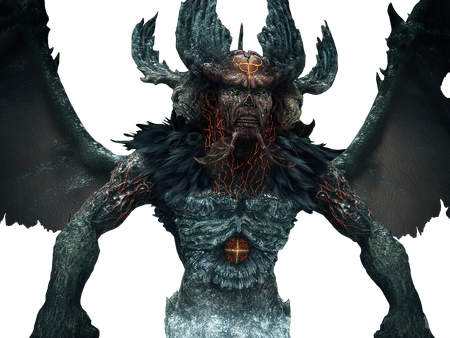 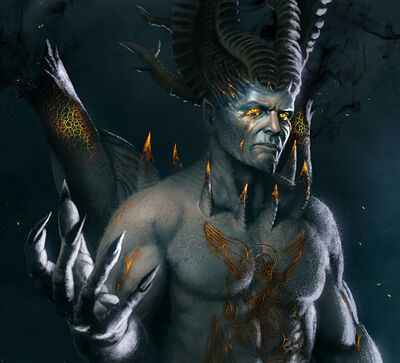 Name: Lucifer, Satan, Dis, The Devil, The Angel of Light, The Prince of Darkness

Age: As old as Creation

Powers and Abilities: Superhuman Physical Characteristics, Immortality (Type 1. He is an immortal creation of God who can only be sealed with the Chains of Judecca. Not subjected to age nor the passing of time), Large Size (Type 1 in his sealed form), Regeneration (At least Low-Mid, likely much higher. Instantly recovered after being impaled in the chest by Dante, and caused Beatrice's soul to grow back its flesh after being burned alive), Teleportation, Avatar Creation (Despite being imprisoned in the Ninth Circle of Hell, he can project a 'shadow-self' into different areas of Hell and even on Earth), Precognition (Cursed a number of damned souls to be able to see the future without knowing the present. Showed Beatrice various visions of modern wars and conflicts), Shapeshifting (Took the form of a snake and God. Can turn into a cloud of fire and smoke), Can cause shockwaves with his punches, Flight, Magic, Hellfire Manipulation (Has control over the fires of Hell and can even call them to Earth), Explosion Manipulation, Ice Manipulation, Air Manipulation (Can create large gusts of freezing air and small tornadoes), Deconstruction (Disintegrated Dante's weapon with a gesture), Electricity Manipulation, Soul Manipulation, Non-Physical Interaction (Can harm, torture, and has complete jurisdiction over the souls in Hell. Damned Beatrice's soul to hell, where he causes her to 'die' and 'resurrect' repeatedly), Telekinesis, Illusion Creation (Causes various events from the Crusades to play out in front of Beatrice), Corruption (Type 3. Corrupted Beatrice's soul after torturing her for a length of time, after which it took Dante's cross to purify her), Necromancy (Caused a number of dead to be raised and attack Dante as he entered Hell), Summoning, Weapon Creation (Particularly the Sword of Lucifer as well as a whip made of fire), Curse Manipulation (Can curse various damned souls in Hell; such as forcing a number of them to lose their ability to perceive the present), Resistance to Disease Manipulation, Acid Manipulation, Soul Manipulation (Through lacking one), Status Effect Inducement (Isn't affected by abilities of Dante's that stun or blind enemies), Attack Reflection (A number of his projectiles are unaffected by the Eyes of St. Lucia)

Attack Potency: At least City Block level (Can cause massive gusts of wind and break apart large portions of the ice in the Ninth Circle. Easily the most powerful being in Hell, far superior to giants who can repeatedly shatter building-sized walls made of stone. Can harm Dante Alighieri with his casual attacks, who stood at the epicenter of a massive explosion he caused, and can cause explosions of such size himself. Disintegrated Death's Scythe with a jesture), likely far higher (Claimed he would "plunge the cosmos into chaos" and "destroy all good in the universe", although he never had the opportunity to perform said feats)

Speed: At least Massively Hypersonic+ (Can fly from the the lowest circle of Hell to the surface of Earth in just a few seconds)

Lifting Strength: At least Class M (Should be far superior to Phlegyas, who can lift large blocks of stone as large as himself)

Durability: At least City Block level (Virtually unharmed by the explosion caused by his clash with Dante; only suffering a wound when Dante drove Death's Scythe into his chest)

Stamina: Extremely High. Even when Dante was deploying an entire arsenal of holy abilities he only mildly annoyed and continued to use his attacks at full strength. Only defeated when a number of souls re-sealed him after they were liberated by Dante

Range: Thousands of kilometers with his avatar (Can influence and control the various circles of hell, which reach from earth's surface to core), hundreds of meters with attacks from his true form

Intelligence: Tricked Dante into freeing him through using Beatrice as bait, and has lived since creation gathering knowledge on escaping his prison and obtaining revenge on the heavens.

Weaknesses: Particularly weak to holy weapons, and can be re-sealed in the seventh circle through a sufficient number of purified souls rebelling against him. In his sealed state, he only has a limited range of movement, although this is mitigated through his Astral form