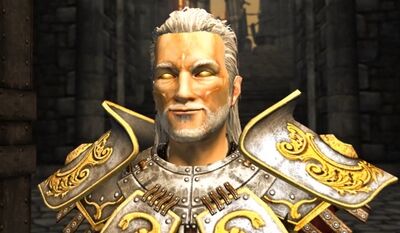 Lucian the Divine, the protagonist of the original game (Divine Divinity) who was "assassinated" by a Dragon Knight. But at the end of "Ego Draconis", it is shown that he is alive, but imprisoned in the "Hypnerotomachia Plan".

Lucian was a simple man at the beginning of Divine Divinity, but he was finally endowed with incredible powers and status as Demigod. Lucian fought against the black ring and their attempts to summon the Chaos demon. His most important victory was against the Leader of the Black Ring, the demon of lies. However, after defeating the demon, he realized that the convocation had been successful and that the demon of chaos had infected the young baby on the altar. Lucian knew he had to kill the child to save the world, but he could not bring himself to hurt the newborn. He adopted the child and named him Damian.

After defeating the black ring and the demon of lies, he became the supreme leader of humanity and was praised as a god. Damian grew up with his father without any sign of Chaos infection or bad thoughts. The black ring, however, discovered Damian's existence and sent Ygerna to Damian to teach him his powers. Lucian discovered Ygerna and his teachings and ordered his execution. It was Lucian himself who was standing in front of Ygerna as a testamentary executor. He tried to force Ygerna to give up the black ring and see what she had done to Damian, but that was not the case. In the end, Lucian hit, but unfortunately, Damian came in and launched a Soul Forge just as Ygerna's life was about to end. Outraged, Damian attacked his father but was forced to flee. Years later, Damian returned to the head of the black circle and again attacked his father, but Lucian proved too difficult for the young man and he was made unconscious. Zandalor said Damian was too far to be shot, but Lucian could not kill him. Finally, he and Zandalor, with a big heart, sent Damian to another dimension and hoped he would never do it.

Damian, however, returned with the help of one of his father's paladins and began his war against Rivellon. In the end, Lucian stood in front of the winner and Damian was forced to retreat, but by the time of his victory, a Dragon Knight, charmed by Damian's power, had stabbed the Divine in the back and had fallen dead.

It was, however, an illusion of Damian who had managed to trap his father in a crystal prison and had promised to see Brillan burn and be able to do anything to save her but watch her. Lucian remained imprisoned for years as the world mourned the loss of their God. It was not long before he had a new company, however, the last Dragon Knight was stuck in a crystal next to him and he explained everything to the Dragon Knight about Ygerna and Damian.

The Dragon Knight managed to flee the crystal prison with the help of Behrlihn's ghost and promised that if the Dragon assisted him, he would also release Lucian. Lucian saw the dragon knight and Behrlihn returned several times, teleported by Bellegar who was trying to trap him again. In the end, the dragon-knight returned, but not by the hand of Bellegar, but by Ygerna, now burned by the citadel of the Ring Destruction; he begged her to surrender but once again she ignored him and attacked the Dragon Knight. The Dragon was victorious and with Ygerna's second death, Lucian was released. Returning to Rivellon at Aleroth, he was greeted by a deafening eulogy and a roaring dragon.

Powers and Abilities: Superhuman Physical Characteristics, Enhanced Senses via Ranger Sight and Elven Sight, Forcefield Creation via Spellshield and Aura of Guarding, Extrasensory Perception via True Sight, Probability Manipulation via True Shot, Energy Manipulation and Projection, Magic, Elemental Manipulation, Status Effect Inducement (Via Stun, Poison Damage, Fire Damage, Lightning Damage), Fire Manipulation, Ice Manipulation, Electricity Manipulation, Light Manipulation Statistics Amplification (Can increase speed, power, and other important statistics), Poison Manipulation, Summoning, Regeneration (Low-Mid; via Survivors Instinct, Can regenerated from near-death), Healing, Necromancy, Telekinesis, Homing Attack Transmutation, Invisibility via Embrace Shadows and Fade from Sight, Transmutation, Ice Manipulation, Life Absorption (All attacks will steal life away from the target and heal the user), Information Analysis (With Identify and Know Creature), Mind Manipulation (Can cause a target to become insane and attack everything aimlessly), Attack Reflection (via Repel Damage; Attackers suffer 25 percent of the damage they inflict. 25 percent chance that damage is reflected.), Self-Sustenance (Type 3; with Elven Stamina), Resurrection, Fear Manipulation, Resistance to Magic-based impairments and Status Ailments as long as his armor is in-tact, Soul Manipulation (Can damage and effect the souls of others), Holy Manipulation (Can bless themselves and others to increase their statistics and remove debuffs), Curse Manipulation and Resistance (Via Curse and Withering Curse; Able to apply a curse that lowers the target's statistics and ignored Resistances), Non-Physical Interaction (Can see and attack Non-Corporeal entities like ghost), Can trade life with a target via Equalize and Forced Exchange (Will trade any damage taken to the opponent, and receive the target's damage in exchange), Resistance to Soul Manipulation (Can survive the soul-attacks).

Attack Potency: Building level+ (Even novice mages are capable of using natural lightning) | Low Multiverse level (An entity with the power of the Divine is capable of ending "time and space and all creation as we know it"; the Divinity verse consists of at least three universes, in the normal World, Demon Realm, and the Void)

Striking Strength: Building Class+ (Able to fight against and damage other novice mages) | Low Multiversal (Capable of clashing with the Demon Divine)

Durability: Building level+ (Can survive against novice mage) | Low Multiverse level (Capable of fighting entities on par with it, such as The God King and the Demon Divine)

Stamina: Above average (Capable of fighting in intense battles) | Infinite

Range: Extended melee range physically, Several dozen meters with magic and range | Low Multiversal (Has all the powers of the Gods, including their magical range)

Intelligence: Varies (Intelligence can vary from average to genius, depending on the character chosen)

Retrieved from "https://vsbattles.fandom.com/wiki/Lucian_the_Divine?oldid=5783673"
Community content is available under CC-BY-SA unless otherwise noted.